Everyone always asks what’s the best phone to buy and we’re taking the guesswork out of that question. For this installment in Best of Android 2015, we’re taking a look at battery: which phone will power you the longest through your daily tasks? Let’s take a look.

As a reminder, the devices we are testing (in no particular order) are the Sony Xperia Z5 Premium, the LG V10, the Nexus 6P, the Moto X Force, the BlackBerry Priv, and the Samsung Galaxy Note 5.

The charge time is the total time needed to charge the handset from less than 5 percent to full. Looking at the numbers you will be able to see which handsets actually charge the fastest and if the advertised quick charging actually makes any difference. All tests were conducted using the charger in the box or an equivalent voltage charger. As you can see the quickest phone to charge is the Moto X Force with a blazing 69 minutes. What makes this even more interesting is that the Moto X Force has the biggest battery in our lineup at 3760 mAh. Next is the LG V10 with its 3000 mAh battery, which took 82 minutes to charge. This is followed closely by the Note 5 which took 89 minutes to charge its 3000 mAh battery. The worst phone in the line up was the BlackBerry Priv which took 159 minutes (2 hours and 39 minutes) to charge up its 3450 mAh unit.

So what do the battery testing apps think of these phones? To test the potential standby time of these devices, each handset was reset to factory settings and the following was added to each one:

Each handset was charged to full and then left to discharge for 24 hours with Wi-Fi on but no SIM card in the phone. After 24 hours, the battery percentage remaining figure was taken and then extrapolated into the total standby time of the handset. The phone which offers the best standby time is the Nexus 6P, followed by the Note 5. The former offers over 200 hours of standby while the latter dips just under 200 hours at 194 hours. Next comes the BlackBerry Priv with 171 hours and then the Z5 Premium with 160 hours. The worse standby time was recorded by the Moto X Force with 133 hours or 5 days and 13 hours.

Use Time (WiFi only)

To test how long you can surf the web over Wi-Fi we used a custom app I wrote which opens six pre-set pages on a loop, with 20 seconds between each load to simulate actual usage. The test is run with the battery at 100% and continued until the battery drops below 5%. 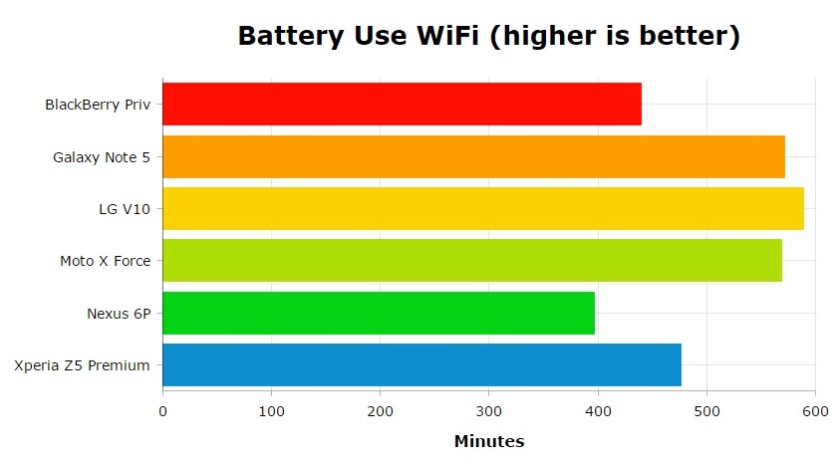 The surprising winner of this test is the LG V10. It seems that its hexa-core Snapdragon 808 processor may not be the world’s fastest but it sure has a lot to offer when it comes to power efficiency. We were able to get 9 hours and 49 minutes out of this device, a truly great score. Second and third place are taken by the Note 5 and the Moto X Force, both of which managed around 9.5 hours. The worse performance came from the Nexus 6P which only managed 6 hours and 37 minutes.

One of the outputs from the GeekBench battery tests is a total potential battery runtime expressed in minutes. Here are the results: 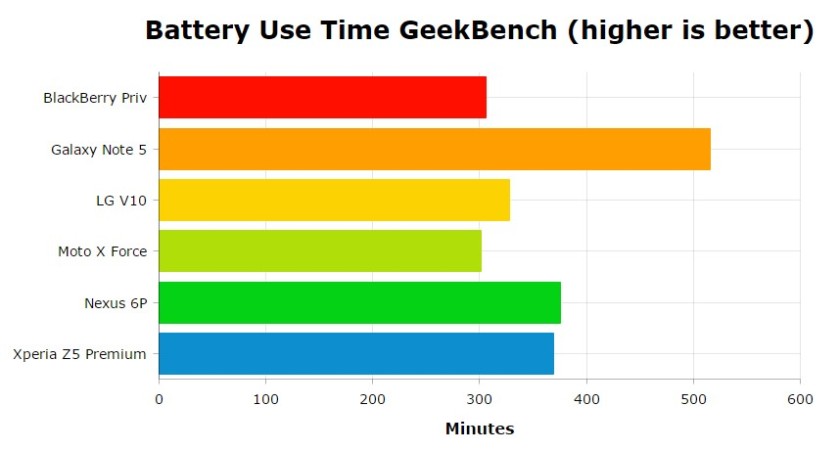 According to GeekBench, the Note 5 has the best potential battery life at 516 minutes, followed by the Nexus 6P and the Z5 Premium, which both scored around 370 minutes. The lowest score was for the Moto X Force.

To test how well each handset copes with video playback, we tested each device by looping the same 1080p Full HD 30fps video with brightness set to approximately 50%. Wi-Fi was also turned off and there was no SIM card in the phone. The final reading is the screen on time of the handset after it ran from 100% to less than 5%. The Note 5 is the clear winner with a time of 652 minutes. Second place is claimed jointly by the Moto X Force and the BlackBerry Priv. The worse score comes from the Z5 Premium with its 4K screen!

So what does this all mean? We have a wide range of screen resolutions on test here, along with a wide range of battery capacities, but at the end of the day it is how long you can use your phone for that really matters. The charging time of the Moto X Force is fantastic and it performs well in several of our tests including the browsing test and the video playback test. However it has the worst overall standby time.