The smartphone has firmly replaced the iPod as the portable music player of choice, and audio playback is an increasingly important factor in today’s high end mobile. Which of today's top smartphones sounds the best? With the smartphone having firmly replaced the iPod as the portable music player of choice, audio playback is an increasingly important factor in today’s high end mobile. Furthermore, with increasingly bold claims of HiFi and even studio quality playback being touted on some smartphones – I’m looking at the LG V10’s ludicrous sounding 32-bit playback option here – we should check to see just how well these claims hold up to some testing.

For this test we’ve also thrown in the ZTE Axon, to see how its “HiFi quality” DAC performs in a smartphone environment and how it stands up to the competition.

To give us an overview of how each smartphone performs, we put each headphone jack through a Focusrite 2i2 interface and ran the popular RightMark Audio Analyser, checking for frequency response, noise and distortion characteristics.

We’ll start with noise and crosstalk, which should push well through the -96dB noise floor offered by 16-bit audio if any of our high quality DACs want to come close to realising their touted 24-bit or 32-bit performance (a practical impossibility I might add). Crosstalk isolation is excellent across all of the models and there certainly isn’t any sign of any stereo bleed issues. However, none of our smartphones make a notable move past the -96dB target. The Xperia Z5 Premium clocks in a decent -100dB, while the ZTE Axon falls some way short at just -92dB. It’s by no means noisy, but seems to defeat the objective of offering a 24-bit codec and LG’s 32-bit DAC boasting is just outright ridiculous.

To be fair to the smartphones though, at approaching -100dB we could be starting to push up against the noise limits of our testing environment as well. So to so avoid complicating the results, we’ll simply test with 16-bit audio from here on out. Moving onto dynamic range, the difference between the loudest and quietest output, we should see all of our smartphones hit the full 96dB dynamic range afforded by our 16-bit test signal. While some smartphones do, three of our models fall short. The Nexus 6P, Xperia Z5 Premium and the ZTE Axon cannot reach the target, meaning that additional noise is likely making its way to the audio signal path somewhere between the DAC and the jack. This isn’t an unexpected result from a compact device with lots of potential for interference, but circuit layout in the leading phones seems to be a little better thought out.

The total harmonic distortion results are excellent across the board, with all of the handsets putting in performance well below 0.004%. The ZTE Axon is the winner by a small margin, followed by the Priv and the V10. The real test for music though is intermodulation distortion, as this shows the amount of distortion generated when playing back multiple tones. There is a greater disparity in this test, with the LG V10, Nexus 6P and ZTE Axon all taking a lead coming in at or below 0.01%. Here the ZTE Axon is again the winner. The Galaxy Note 5 and Xperia Z5 Premium are very close by on 0.012%, while the Priv and Moto X Force are the worst performers, although by no means are they bad and such small percentage differences are going to be very tough to tell apart. Frequency response is as flat as you like across all the tested smartphones, at least when connected up to our interface. Interestingly, the Moto X Force, Nexus 6P, BlackBerry Priv and LG V10 seem to have a low pass filter on their DAC output with a -3dB point at just over 18 kHz. This is likely designed to remove any high frequency interference from high speed signals, such as the codec clock, without interfering with the audible spectrum, or could be something in software. Crunching through the data, it’s definitely a tight run thing in the portable audio space these days, will all the smartphones offering up specifications that are hard to complain about. It’s a bit disappointing to see that none of the higher resolution devices offer a notable bit-depth advantage, but this just highlights the difficulties in fitting low noise audio circuits into a mobile phone, if nothing else. With that said, the “32-bit” LG V10 performs consistently well across all of the tests, followed closely by the Galaxy Note 5 and the HiFi ZTE Axon. Of course, no audio test would be complete without actually having a listen to the phones in the real world. So I stuck a couple of my favourite FLAC tracks on board and had a good listen through some AKG K550s, a reasonably priced pair of “reference” headphones. Honestly, all of the smartphones performed well, as the scientific testing suggested, but there were some subtle differences between a number of the phones.

The “worst” performers, to my ears, were the 6P and the X Force, as the balance didn’t quite seem to keep up with the other phones. Although tone and detail were good across both models, the X Force seems to throw in some heavy hitting bass that verged on boomy for my tastes. The 6P has the opposite problem, lacking any real punch to kick drums and both were missing that extra sizzle on cymbals that really flesh out a track.

The Priv sounded well balanced and delivered nice tone, but seemed to produce a narrower sound than all of the other handsets. This resulted in an experience that felt a bit more sterile. The ZTE Axon suffered from a similar lack of excitement despite sounding nice and wide, but I put this down some missing punch in the lows. That being said, the ZTE Axon offered excellent detail across the spectrum.

The Galaxy Note 5 stood out the most in terms of a unique tone, as the tracks seem a little warmer here than on other phones. After listening, I took a closer look at the intermodulation distortion results and found an interesting introduction of some second harmonic distortion that can’t be seen on other phones (at least not this noticeably). Although it only appears very slight, cumulatively this might be audible when listening to a full track. The panning and high-end detail are excellent with vocals cutting through nicely, but the extra smoothness might not sit well with everyone. The Xperia Z5 is one that the bass junkies will love. It really thumps on kicks but isn’t overbearing and provides excellent details in the mids that holds up well in the highs too. I really couldn’t find much to complain about here but it’s tough to call it notably ahead of the Note 5 or Axon.

This leaves the LG V10 as the stand out smartphone for me, and it was the only one to bring a smile to my face as it managed to conjure up some new sounds from tracks that I thought I knew in and out. The V10 is well balanced across the frequency spectrum and really shines when it comes to detail and spacing. It’s by far the widest sounding phone, which was actually a little disorienting at first, but this really allows for all the small details to come through. Although a 32-bit DAC may be little more than a marketing gimmick from a technical standpoint, the detail and sense of space that comes through with this codec are simply fantastic.

If you’re planning to take your smartphone out on the road, then the maximum volume of the smartphone’s speaker may also be of interest. We took a peak volume reading right next to the phone’s speaker to see which is the loudest. The chart below shows the result and the typical dB values for common environments. 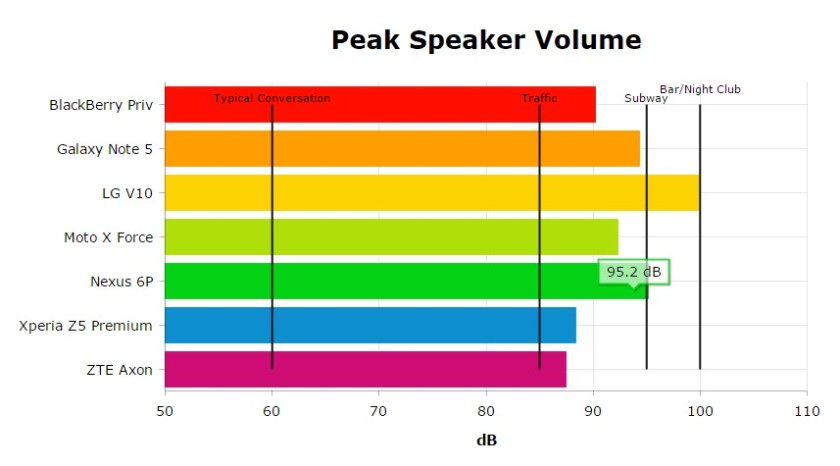 Given that you’ll be holding the speaker away from you and the actual media volume will be more dynamic than the peak, you want to get notably past the markers to be sure that you can make out quieter details. So if you want to watch films in the car, the Note 5, X Force, Nexus 6P and LG V10 should definitely have you covered.

Remember, decibels are a logarithmic scale and every 10dB increase results in roughly a doubling of the perceived loudness of a sound. This makes the LG V10 the loudest of the bunch by some margin, offering up double the peak volume of BlackBerry Priv, Xperia Z5 Premium and the ZTE Axon. At a whopping 100dB I honestly don’t recommend sticking your ear right up next to the speaker.

Given the decent performance of the ZTE Axon in the headphone tests, the speakers were a major disappointment. We didn’t have any complaints about the other phones, but the Axon’s speaker was horrendously tinny.

Taking the whole picture into account, the LG V10 is a pretty clear winner. It comes out as one of the best performers in both the jack and speaker tests, and sounds incredibly good. Second place is a very close run contest, with the Galaxy Note 5, Xperia Z5 Premium, and Nexus 6P all putting in good performances.

The Galaxy Note 5 just edges out ahead in the benchmark and speakers tests, but there’s excellent headphone sound available on the Z5 Premium too. Sadly, the Axon phone’s disappointing dynamic range and speaker results hurt what was otherwise a lovely sounding phone, proving that spec sheet point scoring doesn’t always translate in the real world. Unfortunately, the Moto X Force didn’t stand out in the listening test and had the worst distortion results, so you can certainly do better if you’re looking for a top notch audio experience.