Want to know what the best phone is? Our Best of Android series is answering this very question and in this installment, we're looking at a key feature on smartphones: the display. We’re always asked which is the best smartphone on the market and which is the one to buy right now. To kick off our Best of Android 2015 series we are going to delve right on into every smartphone’s big upfront piece of tech – its display.

Our test subjects are (in no particular order) the Nexus 6P, Moto X Force, BlackBerry Priv, Xperia Z5 Premium, LG V10 and the Galaxy Note 5. This not only gives us a good look at how Sony’s 4K display stacks up against the QHD resolution that has become the norm in this year’s flagships, but also how the latest and greatest AMOLED panels fare against LCD.

Before we delve into all of the results, a quick word about our test. We paired up an X-rite’s i1 Display Pro spectrophotometer up with with CalMAN’s ColorChecker software and the MobileForge companion app, which is used to wirelessly sync up the test images between the phone and our PC software. We set the phone to our desired brightness for each test, attached the i1 Display Pro to the middle of the display, made sure that it was flush to the screen, and then ran the software.

As well as giving us luminance levels and a gamut plot, the software checks the colors produced by the display against an idealised set and gives us an error value (where 0 is perfect). We looked at the basic pure colors used in the reproduction of all other shades; red, green, blue, cyan, magenta and yellow; along with white, to build a profile of how accurate each display is.

To start with, we ramped up each phone to full brightness and measured a white light output with the i1 Display Pro. A higher peak brightness is very useful when trying to use your smartphone in bright sunlight, but this comes at the expense of additional battery drain.

The Xperia Z5 Premium is by far the brightest display with a whopping 629 nits, followed by the BlackBerry Priv at 527 nits and the Note 5 with 493 nits. The Moto X Force and the Nexus 6P are a fair bit darker at their peak settings, managing just 385 and 397 nits respectively. We also thought that it would be interesting to see how each display adjusts between its minimum and maximum settings, to see if the 50 percent phone setting is actually half as bright as the maximum option. 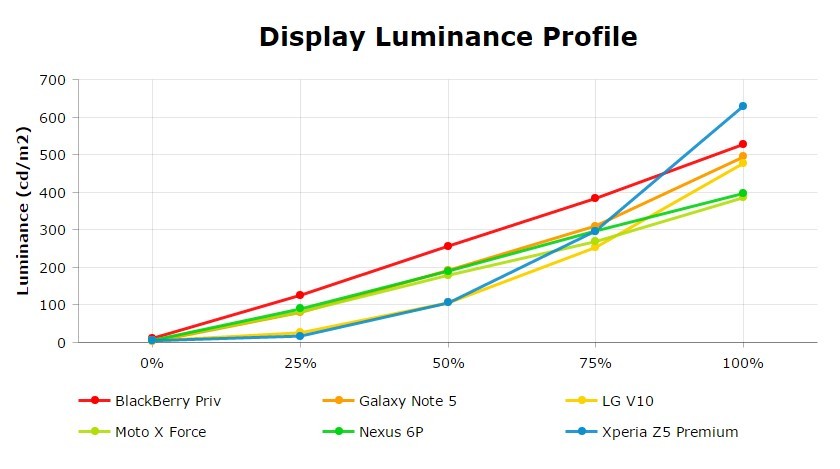 What’s interesting about this result is that the AMOLED smartphones all exhibit pretty much straight lines, so your software brightness setting very closely follows the actual output. The LG V10 and Xperia Z5 Premium both opt for a curved setting, with very little change between 0 and 25 percent, but a much larger swing in the last 25 percent.

The Xperia Z5 Premium, the brightest phone, is actually one of the dimmest until you reach around the 85 percent setting on the handset. It’s the BlackBerry Priv that is actually by far the brightest display on average and the phone should make it easier to find the ideal manual brightness setting for your environment thanks to its linear adjustment.

For our first color test we calibrated each of the smartphone displays to 250 nits, a rather typical brightness for viewing in well-lit environments. Here we are looking to see how closely each display can match the ideal shade, as well as the average and maximum error value across all the colors tested. The Moto X Force is the clear winner here, with both lower average and maximum errors. This is followed by the LG V10 and the BlackBerry Priv, which both boasts very low average errors. The Xperia Z5, Galaxy Note 5 and the Nexus 6P are all similarly poorer performers here.

To grab a closer look at exactly where each display is performing well and poorly, we can take a look at the error values for each of the colors we tested. The Galaxy Note 5 shows some of the highest color errors across the field, which makes sense given the regularly discussed saturated blue and greens of Samsung’s display, which often divides consumers. The Nexus 6P also has a very similar profile. The Xperia Z5 Premium is quite different to the other phones which tend to offer accurate blues. Instead the Z5 Premium is the best at reproducing red and green, but has a higher Cyan error than any of the other phones.

The winner in this test is between the LG V10 and the Moto X Force, which both show lower color errors, particularly in the blues and greens. The V10 probably just edges it here though.

The one display part not tested above is whites. A trend common among LCD panels is to see a blue tint to the whites and this can be observed on both the LG V10 and most notable with the Xperia Z5 Premium. This is because LCD backlights are built from a filtered blue light, while AMOLED pixels provide their color independently. For a closer comparison, the graph below plots the average white error across varying display brightness’s. Interestingly, the LCD panels perform slightly better in this regard when the displays aren’t driven as hard, while the Nexus 6P sees a larger error when it’s display is darker. The BlackBerry Priv has the best whites, although the errors creep up a little when the display is at its darkest or brightest. The Galaxy Note 5 is the most consistent performer, but is a little worse on average than the other AMOLED displays.

Not every viewing condition lends itself to a single brightness. To see if the accuracy of any of these displays would shift if you’re out in the sun at full brightness or having a read before bed with the brightness dimmed, we redid the color test at each phone’s 10, 50 and 100 brightness levels. When it comes to maximum errors we again see a notably poor performance from the Xperia Z5 Premium, which is mostly due to its very poor whites. The Moto X Force again comes out ahead in this test, just beating the LG V10 because of its weaker performance when it comes to whites.

The Priv, Note 5 and Nexus 6P are all pretty close in this test. Also, a common theme across all of the phones is that the maximum color errors tend to improve slightly as you turn the display brightness down. Looking at an averaged picture, it’s a much closer content, with the Priv, Note 5, V10 and Nexus 6P all performing equally well. The Moto X Force is the most accurate display on average but also seems to vary in accuracy slightly when the display is nearer maximum and minimum brightness settings. By contrast, the Galaxy Note 5 and Nexus 6P vary very little as you adjust the brightness, while the V10 and Z5 again show improvements at lower settings.

To explain some of the color error results in a little more detail we should have a look at how each phone’s color gamut compares to the test target. 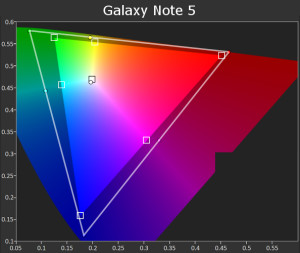 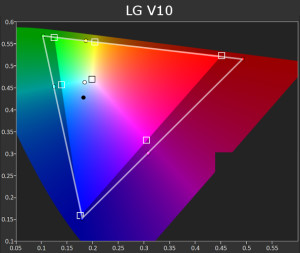 Across all of the phones we see that colors are extended outwards from our test target, suggesting various levels of oversaturation depending on the manufacturer. As the earlier test results suggested, it’s the LG V10 sticks very close to the target around the blues and particularly the yellows, while the Moto X Force maintains quite a linear deviation in the blues and reds. The Priv is also quite a good fit, apart from the slightly overextended AMOLED greens. The Galaxy Note 5 however is clearly overcompensating with the greens and blues and this extra saturation really takes the display away from our ideal test values, producing an unrealistic result and higher error count. The Nexus 6P also follows this same pattern very closely. That being said, some people do prefer this more saturated look, so this is a bit more of a subjective issue that the error results may have made it seem.

For a closer comparison, we can overlay the gamut results on top of one another, allowing us to see how each phone compares to one another. Here we can see the familiar Samsung AMOLED oversaturation debate quite clearly. Both the Galaxy Note 5 and the Nexus 6P offer by far the deeper greens and blues when compared with the other smartphones. By extending saturation here, manufacturers are looking to add more pop to their pictures and it’s interesting that Samsung also choses these colors for its user interface.

The BlackBerry Priv and the Moto X Force are virtually identical across the spectrum, and sit right between the Note 5 and the tamer LCD displays when it comes to green saturation. All of the AMOLED panels are much closer to the target colours in the reds, while it’s the LCD based Xperia Z5 Premium and LG V10 that extend saturation out further here.

Overall, it’s quite a close run competition for the most part, although we have to say that, on paper at least, the Xperia Z5 Premium’s 4K display has rather underperformed. The whites carry a very noticeable blue tint and that has really had an impact on its performance across our tests. Although the phone has the brightest display, its profile is not really the most usable either. However, the Z5 Premium is actually a joy to use and to watch back content on, so like the Note 5, datasheet accuracy is not always the most important factor.

We haven’t really commented too much on the BlackBerry Priv, partly because it has been a solid performer in every test. It has vivid colors without veering into over-saturation, there’s no noticeable color tint and it’s brighter on average than the competition for viewing outdoors. Therefore, we have crowned the Priv as the winner in the display test.

It’s unbelievably close between the other handsets, with each offering up a selection of pros and cons. What the Moto X Force and Nexus 6P lack in brightness they make up for in color and white accuracy. The LG V10 may miss the mark on whites, but it has one of the most accurate displays otherwise. The Note 5’s heavy saturation continues to make it a contentious handset, but it was certainly a strong all-round performer as well.