Samsung tries to explain the purpose of the Galaxy View 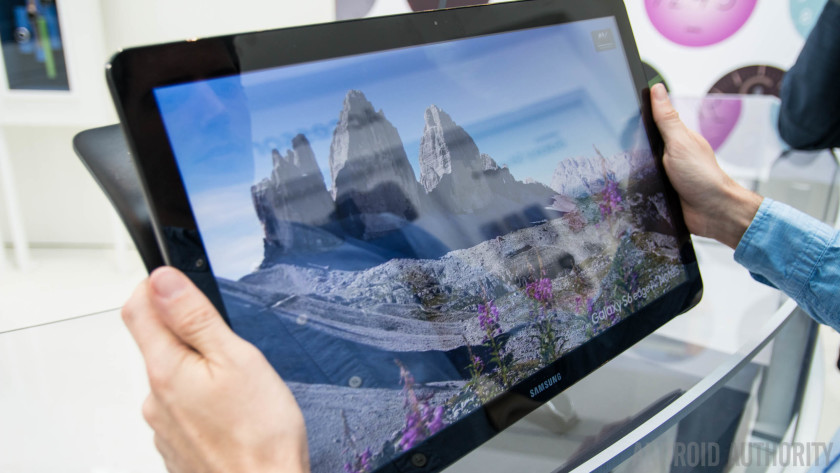 The Samsung Galaxy View is a mystery to many: it’s a 18.4-inch tablet with mid-range specs, and a high price tag. Recently, one of the writers at Engadget mused what many are possibly thinking in a piece titled, “I just don’t understand why Samsung’s Galaxy View exists“.

Author Nathan Ingraham, in his editorial, makes a rather poised point when he says, “I’m sure there’s someone out there who would find the Galaxy View useful, but I can’t imagine how [or] why.”

Clearly Samsung is aware of these misconceptions, for today it took to its official public relations site, Samsung Newsroom, to post “A Galaxy View Usage Guide from Its Product Planners and UX Designers.”

The core of the post can be summarized via its conclusion:

“[The Galaxy View] excels at showing off content and its apps are custom made to fit a variety of lifestyles. A cook might use it for recipes or keeping up with shows in the kitchen; children can play games in the living room; the sports fan can take the tablet from room to room and outside to the grill, keeping tabs on the action without sacrificing the large screen experience.” said DaYoung Park, Manager of Product Strategy Team, Mobile & IT Communications Business.

“The Galaxy View was envisioned by its designers as a fun and useful tool for everyone in the home, everywhere they live.”

And further, in trying to explain how it’s useful outside one’s house,

“It can be a great educational tool for schools and other institutes. It’s a welcome companion on camping trips or tailgating, with a battery that can support eight hours of video playback. Or use it to play music videos at parties, with speakers capable of providing some serious sound.” 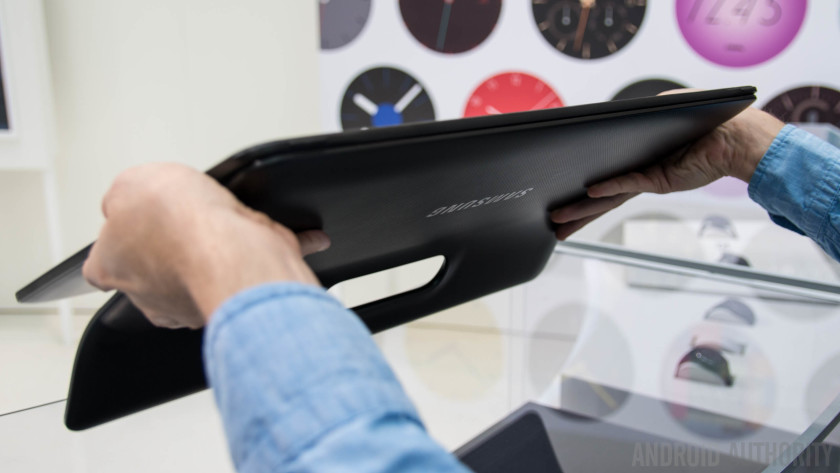 Perhaps the most fundamental question is, “why did Samsung feel compelled to make a lengthy blog post explaining what the Galaxy View is and how to use it?” The answer is, arguably, because very few can find an immediate use for such a large Android tablet. The argument goes back to the size factor: while the Galaxy NotePRO 12.2 was large, there was an extensive amount of productivity and artistic elements that were present in the device. Additionally, it was relatively portable and could be taken anywhere. 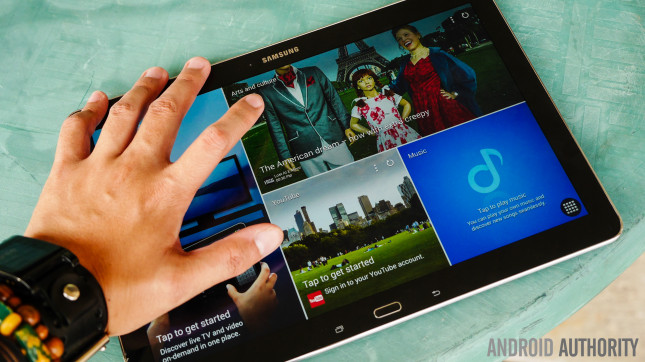 The Galaxy NotePRO 12.2 was already a large Samsung tablet.

With the Galaxy View, it’s so large that Samsung actually deemed it necessary to permanently attach a handle to its rear. The default home screen is a media hub, suggesting that the device is aimed at media. Indeed the company reiterates this:

“As mobile device technologies develop, the line between watching video content comfortably at home or conveniently on the move has faded away. With screen resolutions that match or beat high quality televisions, as well as apps that can play a huge selection of video content, users can easily enjoy watching video through mobile devices, but TVs still have comparative advantages. We wanted to create a device with a large, captivating screen, and with all the versatility and connectivity of a mobile device. If TVs are fixed, and tablet PCs are portable, then the Galaxy View lies in between: a movable,” said Hogon Kim, Manager of Product Strategy Team, Mobile & IT Communications Business.”

The problem, of course, is that many people have both “fixed” TVs and “portable” tablet PCs, to use Hogon Kim’s language. Assuming one has both bases covered, what would compel them to use the Galaxy View? If they’re at home in a living room, they can use a TV. If they’re in bed relaxing they can use a tablet, or even a large phablet. The tablet can also be taken outside the house quite easily. So in what situation would someone who has a TV and a tablet need a giant tablet that wants to be a TV?

Why would someone who has a big screen TV and a 10-inch tablet need an 18-inch tablet that wants to be a TV? They wouldn't.

ASUS had a good idea 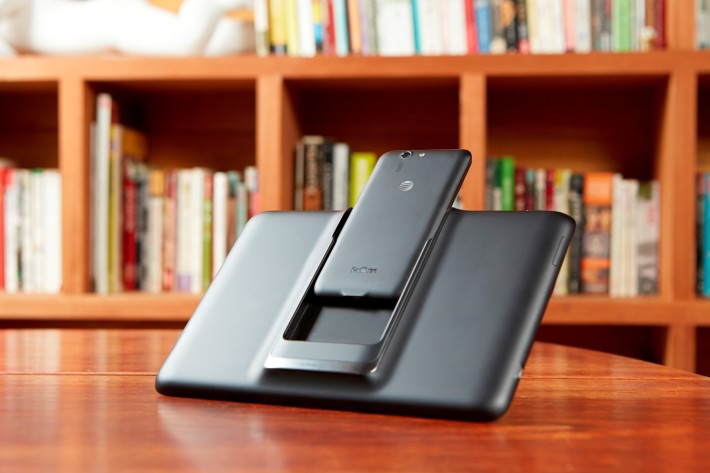 The Asus PadFone series arguably should have served as an inspiration for Samsung’s View.

Truth be told, Samsung’s goals might have been better met in creating a product not unlike the ASUS PadFone. While expensive, ASUS’ series consisted of a standard phone that could dock into a “frame” which would then enlarge the product and turn the picture into a tablet experience. But everything was driven and powered by the phone.

The Galaxy View is a stand-alone product. While Samsung does mention that it’s possible to use a smartphone as a controller for a gaming session, the two devices are basically two different devices. This would have all been different if the Galaxy View had been just a monitor for the company’s Galaxy phones. At the very least, it would have solved the spec problems as, for example, the View has a surprisingly low 2GB of RAM when even mid-range phones these days have at least 3GB.

If the Gear VR can run off the phones, why couldn’t this also have applied to the large screen tablet? At the very least, it would have been a great way to stay connected and be able to use one’s phone in a much more varied context, one they normally wouldn’t. 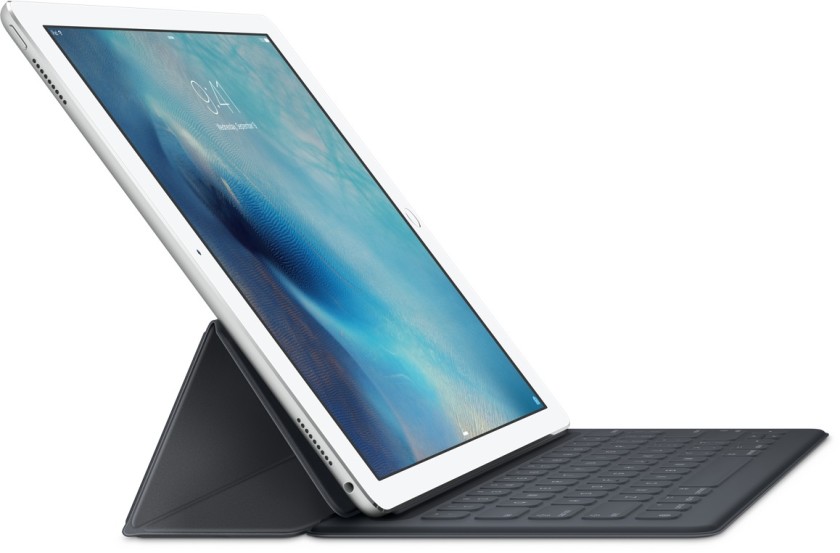 Was the Galaxy View just a pro-active approach to the (then) pending Apple iPad Pro announcement?

There is also a belief held by some that the Galaxy View was simply Samsung’s way of trying to “out Apple” Apple. As it became clearer that Fall 2015 would finally see the launch of the iPad Pro, after years of rumors, perhaps Samsung just needed to have something new and big out. The problem though, is that Apple has poised its product as a creativity platform, and even made the Apple Pencil specifically for it.

Samsung meanwhile, had a perfectly fine competing product as is (the Galaxy NotePRO 12.2) and very well could have just refreshed it as the Galaxy NotePRO 2015 or even the Galaxy View with S-Pen. At the very least, the fact that the Galaxy View does not support any S-Pen input means any chance of the device being used by artists is wholly negated. So again, it goes back to being a media consumption device and seemingly nothing more. Then again this is apparently what Samsung wanted, for it writes that, “Considering the Galaxy View is first of all a media content device, partnerships with content providers from around the world were a key to its success.”

Does a price cut say it all? 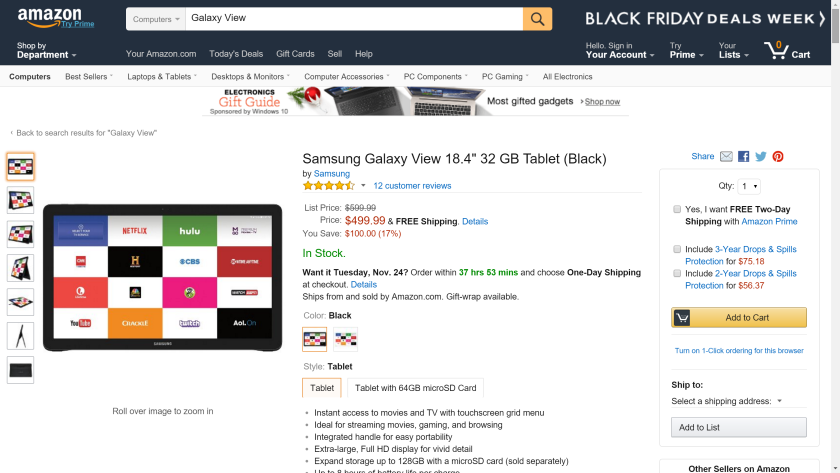 While the Galaxy View has only been on the market for a few scant weeks, the fact that it received a $100 price cut after just one would seemingly imply something’s up. Granted HTC had a 40% off holiday sale on the Nexus 9 shortly after it released last year, but said offer was extremely limited and supply was exhausted within minutes of it going live. Amazon, meanwhile, dropped $100 off the price tag several days ago, and even Samsung itself has lowered the price as part of its “holiday sale” promotion.

Is this actually something Samsung will support 18 months down the line? Even 8 months?

When you have a brand new product and then immediately reduce the price by $100 in such a short period of time, it definitely gives consumers the impression something is seriously wrong. When you add in news like that which Samsung UK posted today, one becomes even more skeptical of the product and its future: is this something Samsung will actually support 18 months down the line? What about even 8 months later? For all intents-and-purposes, the Galaxy View could very well be a one-off type thing where the company tries to wash its hands clean and forget it even exists.

Give it a chance

This is not to say the Galaxy View is a bad product. In fact, there are a number of ways it could be used. By running Android, it’s able to provide a level of usability and interaction that goes beyond even Smart TVs. Likewise, because it’s running Android you could use it to check e-mail, to browse the web, to draft documents (etc) with a Bluetooth keyboard or other accessory. Some people may not feel the need to have a tablet, but they might indeed be interested in the prospect of a giant one that also functions as a stand-in television. It would potentially be great for kids, or their parents: one could watch their desired program on a formal TV, and the other look at content on the Galaxy View. The fact that it does have a handle means you can move it from room-to-room without any real hassle, and unlike a television or monitor it’s not shackled by an AC power cord.

You can move it from room-to-room without any real hassle, and unlike a television or monitor it's not shackled by an AC power cord.

Having personally seen the Galaxy View for myself just yesterday, I will be the first to admit that it’s so large the first reaction will inevitably be a dropping of one’s mouth in astonishment. But with that also comes a lot of potential, and multi-faceted usage potential. As Samsung itself made reference to, the View would be quite well placed in a classroom environment, and in many ways would work far more intuitively than say, a PC might. The complete…view of the Galaxy View.

When Samsung teased the Galaxy View earlier this Fall, few really knew what to expect from such a product. For better – or worse – now that it’s formally on the market, many of those potential consumers’ understandings are no more clear than they were before. The fact that Samsung itself needed to make an actual post to explain how to use its own product basically tells the entire story.

The real problem, unfortunately, is that very few casual consumers will actually know such a detailed insight exists period, and thus either love the device instantly or else write it off without so much as a second thought.

With that said, we’d like to know your thoughts. Is the Galaxy View a good idea, or has Samsung finally succeed in making a product so superfluous that not even its core customers know what it’s for?