Update 2 – Back in Stock

As of Sunday, December 13th the Nexus 6P Special Edition is listed as in stock and shipping within 1-2 business days for customers in Japan.

And…it’s gone. Within just hours of sending “Wish List” confirmation emails, the Google Store is no longer listing the Nexus 6P Special Edition as in stock. In fact, it’s actually reverted to the pre-sale “Add to Wishlist” page on mobile devices. On a standard computer the following page appears however: 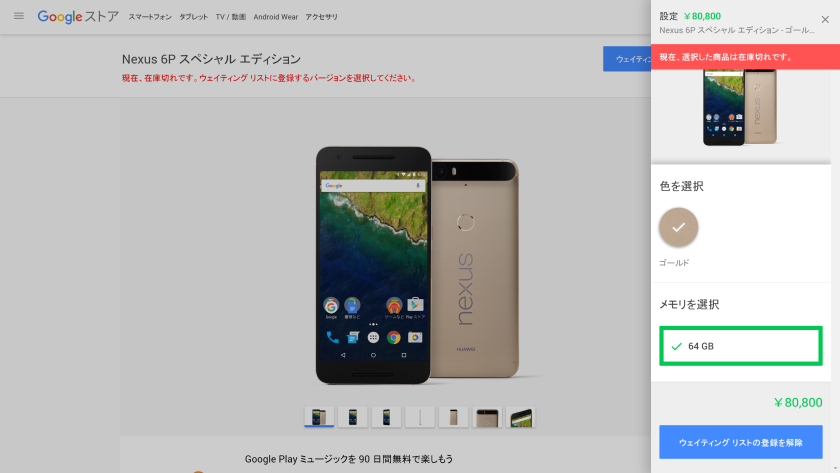 The page specifies that the device is currently out of stock and allows customers to add (or remove) themselves from the wish list. For reference said list is not an actual reservation, rather just eligibility to receive an e-mail when the device is in stock.

It’s likely that as Google made a special site for the Special Edition, it doesn’t have an “Out of Stock” page to fall back on should customers check on a mobile device. SoftBank Mobile, meanwhile, is listing the Gold color as in stock.

The question now is when the Gold 6P will be restocked. Given that SoftBank is carrying it as a standard color, presumably the answer is sometime in the near future. 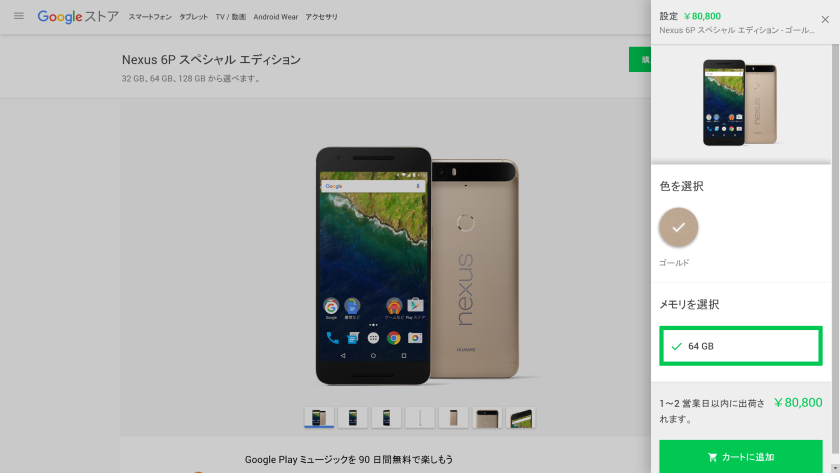 After several months of waiting, the Gold colored “Nexus 6P Special Edition” is now available from the Google Store here in Japan, as well as SoftBank Mobile, the exclusive carrier of the Huawei handset. The phone was originally announced at the Nexus media event back in September, after having been rumored and leaked as a color option in the days and weeks prior to it.

Originally given a release date estimate of “late November”, the device has released 12 days after the start of December. It is unknown as to what caused the delay; it could have been a logistics issue, or it could have been quality control problems related to the limited production of a specific color variant.

At the moment, it is unclear as to how long the Nexus 6P Special Edition will be produced. While all signs point to it being a standard model for the Japanese market – just with an alternative name to denote its exclusivity – there is the possibility that it will only be produced for a set period of time. Likewise, it is unknown as to if or when this color variant will be released in other countries; many have already expressed confusion as to why Japan is the sole recipient of the Gold shade, especially given the  more significant appeal the color choice has outside of the country, in Asia.

The Nexus 6P Special Edition is available in a 64GB configuration only, and retails for the same 80,800 yen ($665) as the standard 64GB models. There is absolutely no difference whatsoever with respect to the device’s internals; the “special” element refers solely the color.

For those seeking to import 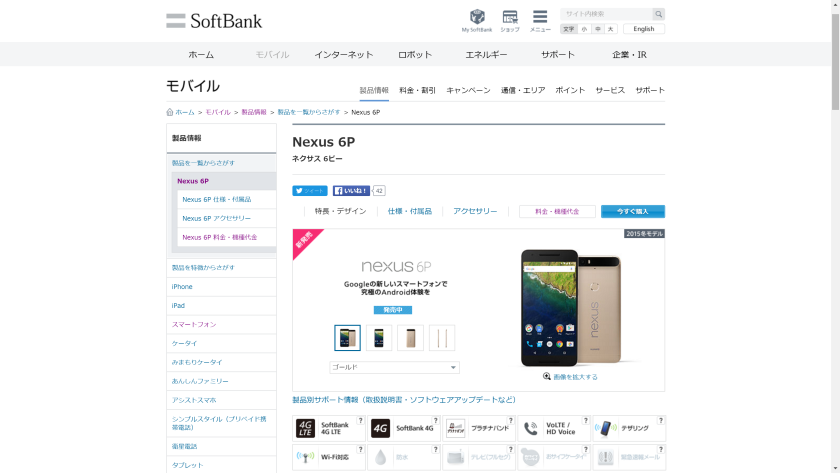 Given the nature of the global market, it is likely only a matter of days, if not hours, before sellers on channels such as eBay begin to offer the device. It would not be surprising to see individuals seeking to make a major mark-up, charging in excess of $1000, perhaps even $1500, or $2000 for the product.

For those who may seek to purchase it, please be aware that SoftBank Mobile does not unlock devices, and thus unless a special exception has been made for this product, a SoftBank Nexus 6P will only work with a SoftBank SIM card. It is therefore imperative that only Google Store variants be purchased. Unfortunately as the packaging for Nexus devices this year in Japan, be they carrier or direct sales, are indistinguishable, the burden of trust will thus be placed on the seller.

How to verify the IMEI status There is one way to check however. Similar to the ESN system used in the United States, SoftBank (as well as other carriers) has a database that allows owners to check on the payment status of their phone. By entering the IMEI number here, one of four possible symbols will appear: a “CIRCLE” which indicates the device has been paid off, a “TRIANGLE” which indicates the device is under an installment plan and therefore not paid off, and an “X” which means the device has yet to be registered on the network. If a “MINUS” appears however, it means that the device is NOT listed in a Japanese carrier database.

Testing a Taiwanese HTC One A9 and a Google Store Japan LG Nexus 5 in the system yielded a (-) “MINUS” which makes sense as neither device is sold by a Japanese carrier. By this same account, a Google Store variant of the Nexus 6P should also turn up as a “MINUS” thus to those importing, it is recommended you request the device IMEI and enter it into the above link to verify the “MINUS” result.

Is anyone interested in the Nexus 6P Special Edition? Are you angry that Google has ignored your country with such a smartphone? Surprised by the price tag? Leave us your comments below and let us know!

November 1, 2020
Latest
The best microSD cards available right now (Update: Evo 128GB on sale for $16)
by Ankit Banerjee11 hours ago1882 shares
Best workout earbuds of 2020: Jaybird, Bose, Beats, and more
by Lily KatzNovember 23, 2020179 shares
You Might Like
Here’s when Huawei will update your phone to EMUI 11
by Jon Fingas3 hours ago24 shares
Report: Huawei P50 series is indeed coming, could pack Kirin 9000
by Hadlee SimonsNovember 23, 2020549 shares
Huawei sells Honor under ‘tremendous pressure’ from US sanctions (Updated)
by Adamya SharmaNovember 19, 2020
Even Huawei’s biggest rival is arguing against banning it
by Hadlee SimonsNovember 18, 2020327 shares