Huawei Mate 8 to go on sale this week 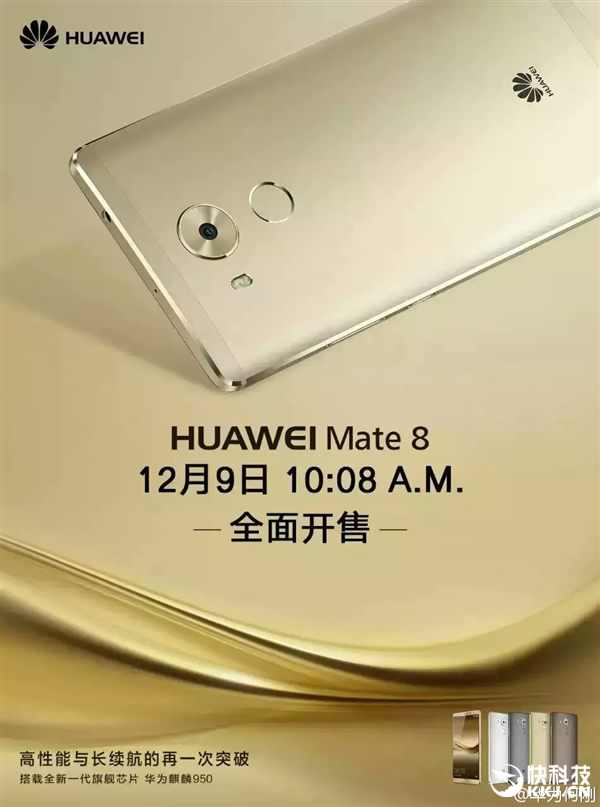 Last month, Huawei unveiled its new Mate 8 flagship smartphone and the handset will finally be going on sale this Wednesday, December 9th, at least in China. The announcement was made by Huawei’s head of smartphones, He Gang, and has been accompanied by the teaser above.

For a recap, the Huawei Mate 8 comes packing the company’s new Kirin 950 SoC, which is an octa-core big.LITTLE chip based on four Cortex-A72 and four A53 CPU cores, as well as a Mali-T880 MP4 GPU. There’s either 3GB or 4GB of RAM to choose from depending on the internal memory size, along with a 6-inch 1080p display, 16 megapixel rear and 8 megapixel front cameras, and a 4,000mAh battery. The Huawei Mate 8 will carry a variety of price tags for its different memory options. Here’s the breakdown:

Huawei is expecting that its Mate 8 will outsell its predecessor, which managed 7 million sales within one year. A target of one million units per month is pretty bold, but the Mate 8 certainly has a plenty of hardware on offer at a competitive price point. International availability will be announced at CES 2016.