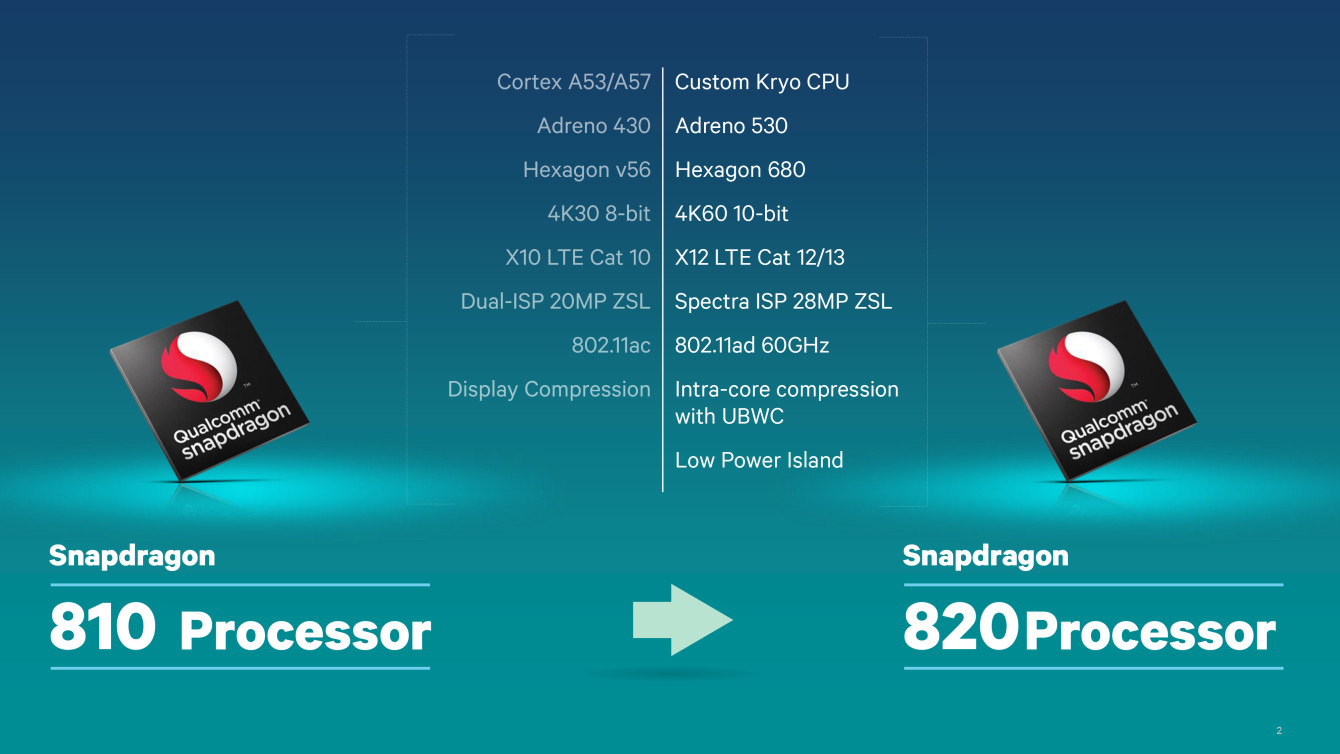 Snapdragon 820 is an important product for Qualcomm. Officially unveiled last month, the company is hoping to put behind the whole Snapdragon 810 fiasco with their new chipset, which once again is based on custom ARM cores, true to Qualcomm’s style. Having released their first Snapdragon 820 powered MDP (Mobile Development Platform) devices, AnandTech and TomsHardware were quick to obtain them and put the new chipset through a wide range of tests. This article summarises the most important findings from all the testing done by the respective publications. Before diving in, let’s talk a little bit about the Snapdragon 820.

The Snapdragon 820 is Qualcomm’s return to its roots. Unlike the Snapdragon 810 which makes use of ARM Cortex A57 cores, the new flagship SoC uses custom “Kryo” cores. Also, Qualcomm has stuck to a 4-core design instead of squeezing in 8 or 10 cores into a SoC meant for mobile devices. These four cores are arranged in a heterogeneous multi-processing (HMP) configuration, with two high-performance cores clocked higher and paired with more L2 cache, and two low-power cores that have a lower clock speed and smaller L2 cache size. Also, L3 cache is completely absent from the chip.

Benchmarks show that the new Kryo cores are able to hold their ground against competition and beating its predecessors by a fair margin in most tests. Single-core integer performance, as well as floating-point performance of “Kryo” exceeds that of the ARM Cortex A57, and is most likely to edge out the Cortex A72 as well. However, faster-clocked chipsets based on the Cortex A72 core might give Qualcomm tough competition. Kryo appears to have superior instructions per cycle (IPC) on its side when compared with the Snapdragon 810’s A57. Meanwhile, Apple’s “Twister” continues to lead in single-core performance benchmarks, thanks to its more unique architecture.

Memory bandwidth in the Snapdragon 820 is greatly improved, offering more than twice the performance of the Snapdragon 810 in specific GeekBench 3 tests. The other results ranged from between 55 and 103 percent, although mostly hovering closer to double the speed. Qualcomm has surely made some improvements to the memory controller and the general architecture governing memory transfers, allowing the chip to make optimum use of the theoretical bandwidth offered by the two LPDDR4 memory controllers, which offer a theoretical bandwidth of 28.8GB/s. The fasted speed clocked across the test revealed a peak bandwidth of 17.4GB/s on the 820, compared with 7.5GB/s for the Snapdragon 810.

Apart from that, the new Snapdragon 820 features the Adreno 530 GPU, which by the way completely dominated all the benchmarks thrown at it (save for 3D Mark Ice Storm, which is believed to be resultant of CPU limitation). In GFXBench tests, the Adreno 530 manages to score anywhere between 52% to 72% higher than the next-fastest Android device, which in this case is the Galaxy Note 5 powered by the Exynos 7420 chipset. Only in 1 or 2 benchmarks did the Apple A9 powered iPhone 6s Plus fare better than the Snapdragon 820. 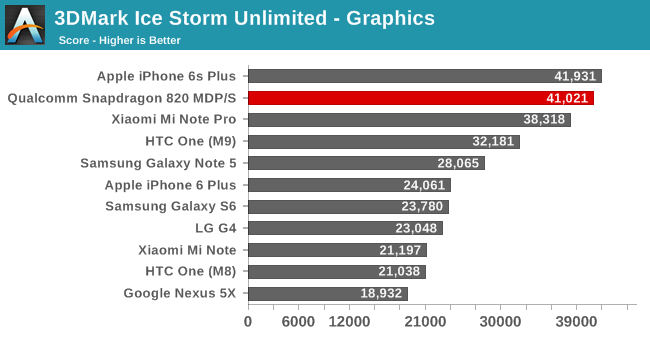 Qualcomm claims that the Snapdragon 820 draws 30% lesser power than the Snapdragon 810, despite it being much faster. AnandTech noted that the MDP device didn’t overheat, i.e. get too hot to touch or handle, neither did it show signs of throttling. Of course, more in-depth thermal assessments will have to be done on commercial devices before concluding anything, but initial impressions are positive. Perhaps moving down to Samsung’s 14nm LPP has done Qualcomm a lot good.

All performance benchmarks were done on Qualcomm’s MDP device. Its specifications include a 6.2-inch Quad HD (2560 x 1600) display, 3GB of LPDDR4 RAM, 64GB of Universal Flash Storage, a 21MP rear camera, a Sense ID ultrasonic fingerprint scanner, and of course, the Snapdragon 820 SoC.

For the sake of consistency, only results from AnandTech have been included in this article. For a more comprehensive analysis and complete set of benchmarks, kindly visit the original source articles.