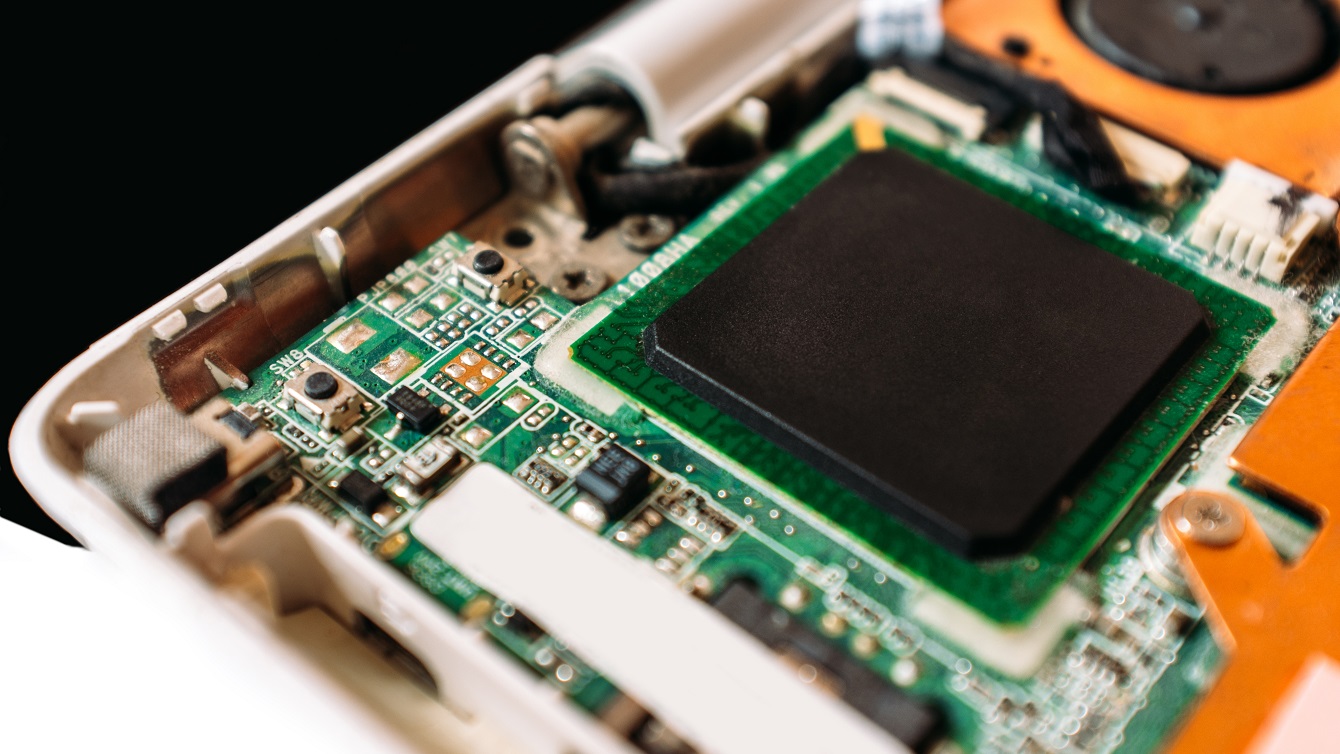 Update: Samsung has officially announced its Exynos 8890, so we have updated the post to reflect these new details.

Qualcomm has officially launched its Snapdragon 820, Samsung just unveiled its Exynos 8890, Huawei’s HiSilicon has its latest Kirin 950 SoC, and MediaTek has already dished out the details on its early 2016 chip range. Although we are still waiting on more specific details about the Qualcomm Snapdragon 820’s Kryo CPU and Samsung’s custom processor, we now have a pretty good idea about what the mobile processor sphere will look like in the first half of 2016, and it’s shaping up to be a highly competitive scene.

Today we’re going to look at the new Qualcomm Snapdragon 820, Huawei Kirin 950 and the MediaTek Helio X20, and the newly announced Samsung Exynos 8890 as well. Here’s a general breakdown of how the processing hardware inside each SoC stacks up:

While 2015 has been dominated by octa-core CPU designs from all of the major SoC vendors, 2016 looks set to split the market firmly into two camps. While HiSilicon, MediaTek and Samsung are all set to continue with ARM’s big.LITTLE architecture, Qualcomm is planning to move back over to a quad-core setup with its Snapdragon 820, albeit with a slightly asymmetrical 2 by 2 cluster setup. MediaTek, on the other hand, is taking the multi-core strategy even further with the arrival of its 10 CPU core Helio X20 CPU, which arranges core clusters into a Min.Mid.Max configuration to try and offer a smoother transition from low power to high performance scenarios.

While big.LITTLE designs make use of a mix of high performance and lower power CPU cores to balance out power and performance depending on the required task, Qualcomm appears to be using four almost identical CPU cores in the Snapdragon 820, named Kryo. Qualcomm has borrowed some ideas from its time with big.LITTLE, opting for two slightly different Kryo core clusters in a heterogeneous processing setup. Combined with clock scaling, core gating, and design optimizations, it will be interesting to see how this SoC compares to chips that leverage much lower power components. Qualcomm’s focus on Heterogeneous Compute (HC) for some tasks may prove key to keeping power consumption to a minimum, given the performance gains that Qualcomm is touting with Kyro. An overview of Huawei’s Kirin 950 SoC, an advancement over the big.LITTLE chips seen throughout 2015.

Speaking of HC, both the MediaTek X20 and Kirin 950 also feature an ARM microcontroller-based “companion core”, which have access to the main SoC DRAM. These are designed to help save on power by taking over “always-on” activities. The X20 features a Cortex-M4 while the 950 makes use of a more powerful Corex-M7, but both of them are designed to reduce idle and sleep power consumption over using more power hungry CPU cores alone. Qualcomm is looking to do a similar thing with its own Hexagon 680 DSP unit and these additional low power units are becoming important to help save on battery life as larger CPU cores become more powerful, and therefore more demanding from our battery cells.

Looking past just the CPUs, all of tomorrow’s mobile SoCs are complex, multi-processor machines.

The reason for Qualcomm’s move back over to a quad-core design is all to do with the company’s new Kryo CPU. Rather than using a licensed designed from ARM, such as the Cortex A57 and A53 found in the Snapdragon 810, Qualcomm is moving back over to an in house CPU design that makes use of the same ARMv8-A (64/32-bit) instruction set as all other modern mobile processors.

We don’t know the ins and out of the core, but Qualcomm has made some interesting tweaks to the SoC design, offering two higher clocked cores with their own cache and two slightly lower clocked cores with a different cache configuration. It’s not really a big.LITTLE setup as the cores are the same architecturally, but two clusters each appear to be optimized in favour of energy efficiency and performance.

The 2 by 2 Kryo CPU configuration inside the Snapdragon 820. Source: AnandTech

Qualcomm is boasting up to twice the performance or up to 2 times the power efficiency when comparing Kryo with the Snapdragon 810. Although, I’m sceptical that we’ll see gains that big in anything other than in very specific use cases. Qualcomm has recently said that the 820 offers around a 30 percent improvement in energy over a day’s worth of use, which sounds a little closer to what we can probably expect.

Samsung has also moved over to its own custom high performance CPU core design with its Exynos 8890 SoC, which may appear in the Galaxy S7. Samsung states that its custom CPU offers a 30 percent improvement in performance and 10 percent in power efficiency compared to Exynos 7420 in the Galaxy S6, so we can expect some serious single core grunt. However, unlike Qualcomm the overall SoC design is still based on a big.LITTLE design and will feature eight CPU cores: four high performance custom APs and four Cortex-A53 cores for lower power consumption.

Both companies are looking at notable single core performance boosts, but seeing which chip ends up better suited for mobile, both in terms of performance and energy consumption, is where the real battle will likely be won or lost.

Those SoC vendors that aren’t designing their own CPU cores are lining up to make use of ARM’s latest Cortex-A72 CPU, which boasts some small performance gains over the popular Cortex-A53 and should see notable gains in energy efficiency. Both MediaTek and HiSilicon are pairing up this A72 with the efficient A53, although MediaTek believes that the best balance comes from using two A72s in its X20, while the Kirin 950 is using a quad-core cluster for additional peak performance.

There looks to be a much bigger variation in CPU design heading into 2016, which might produce some varied results in terms of performance and energy efficiency.

As well as new CPU technologies, all the major SoC designers are moving over to updated GPU components too.

The Mali-T800 is a particular popular choice for the next-generation of high-end mobile processors. In typical ARM fashion, energy efficiency has been improved by up to 40 percent with its latest generation design, which lends itself to a boost in performance too. Depending on the number of GPU cores and the manufacturing process used, there’s up to an 80 percent performance increase available over the Mali-T760. 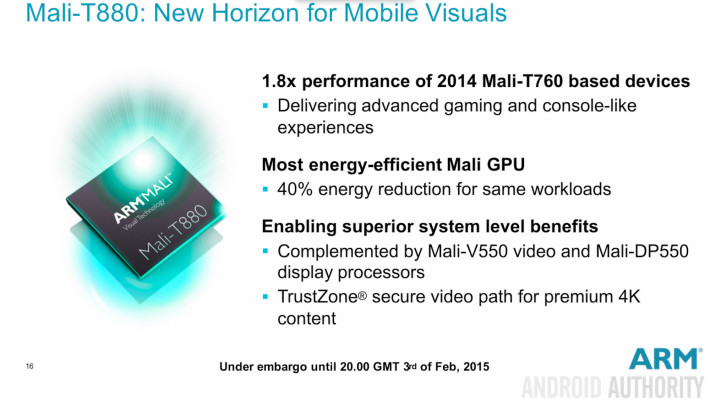 MediaTek’s Helio X20 and the Kirin 950 are both confirmed to be using this GPU in a four core configuration. Samsung is picking up the part as well, as it is a successor to the Mali-T760 found in its current Exynos 7420, but hasn’t announced the core count yet. Qualcomm will be going alone with its Adreno 530 architecture, which is promising similar gains in energy efficiency and performance over this year’s 430. Gamers will almost certainly be happy with these next-gen chips.

What to expect – performance

One of the other points that we haven’t mentioned is the move over to new manufacturing processes. Samsung has a lead this generation thanks to its in-house 14nm FinFET line, but other companies will be catching up with similar processes with their latest chips.

We know that the Snapdragon 820 is making use of a 14nm process, quite possibly Samsung’s, while the Kirin 820 will be manufactured on TSMC’s 16nm FinFET process, bringing these chips level with the performance and energy efficiency gains that Samsung currently has. MediaTek’s Helio X20 will be designed on a 20nm process, which is where the Snapdragon 810 currently sits.

While we don’t have any hands on products with these chips inside to test their real world capabilities, a series of benchmarks for these SoCs have already appeared online, giving us a very general overview of where they sit in comparison to one another. Here’s a summary of the results, with the two leading chips from this generation thrown in for comparison. Don’t take these results as final though, things could easily change before products appear in our hands and their accuracy cannot be verified. 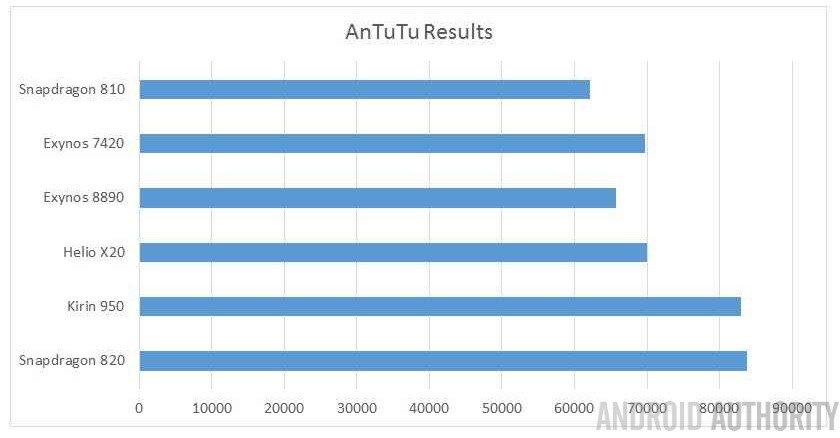 What we can surmise is that single core performance between Qualcomm Kryo and the new Cortex-A72 is going to be quite close, but both offer gains over the current A57 based SoCs. Samsung’s custom AP looks to be even more powerful in this regard, which is perhaps quite a uprising turn of events.

The use of additional lower power CPU cores appears to give high core count chips a lead over Qualcomm’s new SoC in multi-core scenarios, which is to be expected. We also see that the Helio x20, which has just two heavy duty A72 cores and eight smaller A53s, doesn’t quite keep up with the octa-core Kirin 950 or Exynos 8890, but the differences might not be quite so pronounced in the real world.

The really interesting battle is going to be for energy efficiency, where the LITTLE cores might prove beneficial, although Qualcomm has clearly made optimizations to lower power consumption as well.

It’s worth noting that the scores for the rumored Exynos 8890 have varied quite wildly, ranging from results that are slightly below the 7420 up to the current score. Apparently, the chip has been tested in various power saving modes, which accounts for the slightly lower AnTuTu score when compared to the higher, more recent GeekBench result.

We will have to wait for dedicated GPU results once smartphone’s start arriving in our hands before we can delve any deeper, but initial benchmarks seem quite promising for all of these chips.

What to expect – features

SoCs aren’t just defined by their processing power these days though, support for extra features; such as enhanced DSP, image sensors and networking capabilities; also define the type of experience that customers have from their phones.

Higher resolution and multi-ISP support continues to be a big selling point and an area that Qualcomm has typically been on top of. The Snapdragon 820 will support up to three image sensors at once with its new Spectra ISP, and sensors up to 28 megapixels in size. Huawei’s Kirin 950 boasts dual ISP support or a single 34 megapixel sensor, while the X20 can handle 32MP video at 24fps or 25MP at 30fps. 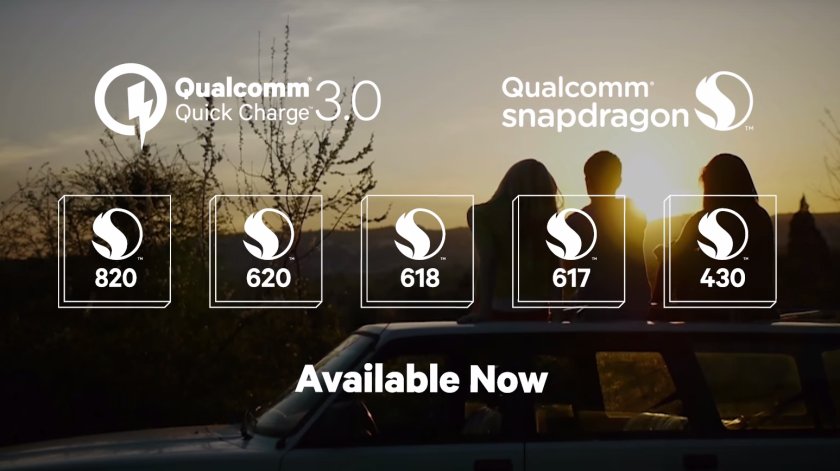 Qualcomm’s Quick Charge 3.0 will also be available with the Snapdragon 820.

Sticking with image technology, all of the three manufacturers who have confirmed their next-gen chips have also stated that their ISP and DSP chips will offer a number of improvements, ranging from faster processing algorithms to face detection. 4K video playback is also supported across the board, as is enough GPU power for QHD display resolutions. Overall, the imaging feature set is going to be very close next year.

Qualcomm will also be bringing its Quick Charge 3.0 technology with the Snapdragon 820, which will be more efficient than Quick Charge 2.0. Other manufacturers have similar options for fast charging too, but we’re not sure how this ties into these SoCs.

When it comes to networking, Qualcomm and Samsung both look to be slightly ahead with their ultra-fast 4G LTE support, offering up to Category 12 LTE download speeds of 600Mbps compared with Cat 6 speeds of 300Mbps offered by Huawei and MediaTek. The Snapdragon 820 and Exynos 8890 also feature Cat 13 download speeds of 150Mbps.

Huawei, Qualcomm and Samsung are also supporting HD voice and LTE Wi-Fi video calls with their latest chips. The Snapdragon 820 also supports both 802.11ad and 802.11ac 2×2 MU-MIMO, which will allow Wi-Fi connectivity to be up to 2-3x faster than the standard 802.11ac without MU-MIMO, and will be the first commercial mobile processor to take advantage of LTE-U.

It’s worth noting that most carriers aren’t offering speeds that will max either of these modems speeds out yet, but future proofing has never been a bad thing.

There you have it, there’s plenty of performance, battery and feature improvements heading our way in 2016. Despite a number of feature similarities, the mobile SoC industry appears to be taking on some quite different approaches to processing than the designs that appeared in nearly all 2015 flagships. It is certainly going to be interesting to see how phones powered by these new chips stack up in the real world.