If you happen to be a Verizon customer and are in the market for a brand new Android smartphone, Motorola has just announced two new options that may be worth your while. The Droid Turbo 2 and Droid Maxx 2 are the much-anticipated sequels to Motorola’s most recent Verizon-exclusive devices, with each smartphone bringing something unique to the table.

Don’t miss: 5 problems with the Droid Turbo 2 and how to fix them

We’ll be taking a look at the lower-end Droid Maxx 2 very soon, but for now we’re focusing on high-end Turbo 2. With it’s extremely durable build, big Quad HD display and 21MP rear camera, can this new device stand out enough from the crowd? Without any further ado, let’s take a quick look at the new Motorola Droid Turbo 2! 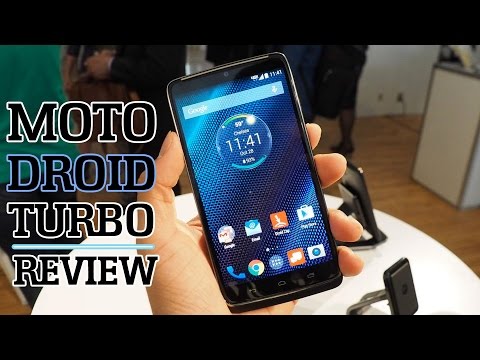 The first Motorola Droid Turbo had a high focus on reliability and durability, something the manufacturer has taken to a whole new level with the newer Droid Turbo 2. This handset offers the same awesome battery life and durable materials, but they have also made the screen shatterproof.

I just had to test this myself, so we went ahead and performed those teeth-grinding drop tests you guys love so much. We can’t just let a “shaterproof” phone go without some concrete diving, right? That is exactly what I did – dropped the phone straight into concrete, screen facing down, from shoulder height. And not only once, I dropped this thing  4 times! The phone’s screen was as good as new at the end. Moto Shatershield (as Motorola calls it) provides 5 layers of shock absorption. Furthermore, the AMOLED panel happens to be a flexible one, which makes it even more resistant.

By the way, these are only our initial tests and we won’t be giving up anytime soon. It will be fun to see exactly how much it takes to shatter this screen, so you best keep it tuned to Android Authority to see how that turns out!

Speaking of the screen, this thing is quite the beauty. The Motorola Droid Turbo 2 sports a 5.4-inch QHD (2560×1440) AMOLED display, which just so happens to be slightly bigger than last year’s Droid Turbo by 0.2 inches. Needless to say the screen looks very good, as we can expect from all high-end AMOLED panels. In habitual fashion, colors are vibrant and blacks are as deep as night. It may not display the most accurate colors, but that is normal with these types of screens. In addition, it seems the screen is not the brightest, but we’ll have to play with it under different lighting situations to see how it really performs.

Based on our few moments with the device, we can tell you we are definitely impressed with the display.

The Droid Turbo 2 is no under-performer. This bad boy touts a Qualcomm Snapdragon 810 processor paired with 3 GB of RAM, making it a bit superior to the Moto X Pure Edition, on paper at least. Motorola also didn’t fail to provide top-notch battery life, including a sizable 3760 mAh battery. There is a bit of a downside here, though, as this is smaller than the 3900 mAh battery the previous generation Droid Turbo had. Again, we will have to keep testing the phone to pass judgement on this. Motorola does claim the new smartphone should last 48 hours on a full charge, which is not too shabby. And the official turbo charger can have you up and running for 13 hours in just 15 minutes of charge time, anyways. Those who are all about charging technology will also enjoy learning the Droid Turbo 2 does support wireless charging.

This handset is running Android 5.1.1 Lollipop. We were obviously hoping for Marshmallow, but the update shouldn’t be too far down the road; especially considering the Droid Turbo 2 uses near-stock Android.

Motorola’s fun features didn’t fail to be included here. Users will still enjoy Moto Display, which activates the screen with small movements or gestures. In addition, one can twist a wrist while holding the phone to launch the camera app. Or flick the phone and the flashlight will turn on. Touchless controls are obviously included, as well.

We have come across no hiccups so far, so the software seems to be solid and everything runs smoothly. We’ll see how the near-stock Android UI holds up after a few weeks of use. Customization at its best

Likely one of the most exciting additions is the ability to customize your handset via Moto Maker. It has been great to see Motorola expanding this feature to pretty much all Motorola devices coming out these days. Users can design their Droid Turbo 2 with the soft grip and leather materials we have seen in Moto X products. But what I currently have is a nice white, soft grip back with a scale pattern. And of course, you can also opt for the industrial-looking nylon design Droid Turbo users are so accustomed to. There’s plenty of action surrounding the Motorola Droid Turbo 2. A plethora of little sensors make Moto Display run smoothly. In addition, the 5 MP selfie camera sits next to a front-facing flash. A speaker also decorates the handset’s front (it may look like two speakers, but only the grill in the right of the Verizon logo plays sound).

By the way, these speakers sound pretty good. Audio is crisp and has very good treble to it. It also happens to get pretty loud, but we’ll do more comparisons before we give you our full verdict. Regardless, it’s always good to see a front-facing speaker on board. Last year’s Droid Turbo featured a nice 21 MP camera, something that didn’t change for the second iteration. We are expecting to see photos to be of similar quality to the Moto X Pure Edition. What they did improve a bit is the front-facing camera, which now clocks in at 5 MP. We can’t tell you too much about these for now, but expect to see the whole run-down in our full review. No official pricing information has been fully revealed, but we can make everything out by looking at the monthly installment plans. The 32 GB Droid Turbo 2 will cost $26 a month, while the 64 GB version goes up to $30 per month. Based on a 24-month plan, we can assume the prices are set at $624 and $720, relatively. And don’t forget purchasing the 64 GB version will grant you a free design refresh. This means you can switch your colors, accents and materials down the line, if not fully satisfied. This makes that 64 GB Motorola Droid Turbo 2 much more appealing!

For those wondering when the phone will hit store shelves, the release date is set for October 29th. It will launch right next to the Motorola Droid Maxx 2, which we also had some time with, so stay tuned to check that phone out! Are any of you thinking about picking up the Droid Turbo 2? Let us know what you think in the comments.