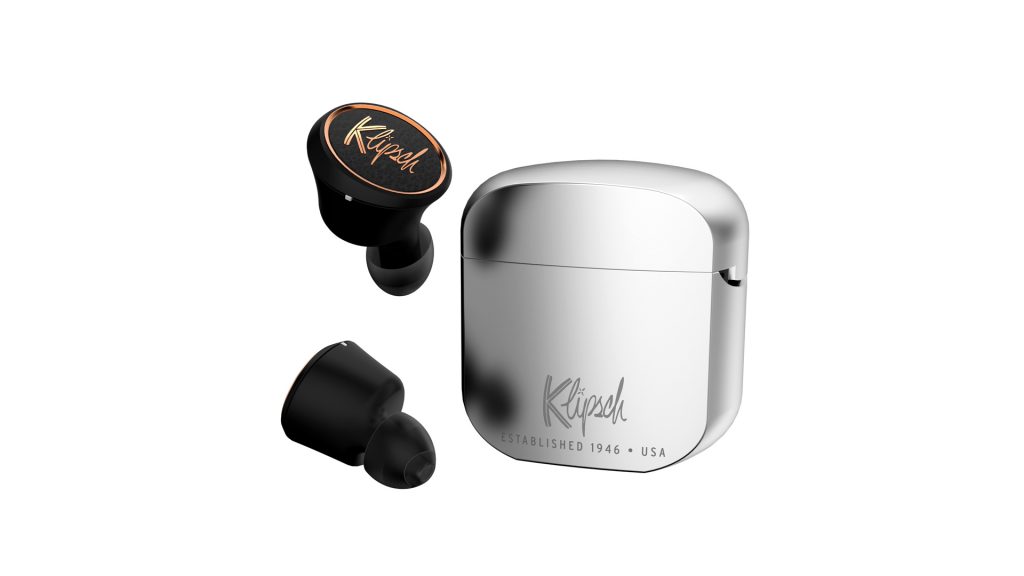 Every year Klipsch has a fairly strong presence at the CES in Las Vegas, but this year the company might outdo itself with new Heritage speakers, five new soundbars, and a new line of in-ears including its first pair of true-wireless earbuds.

The T5 earbuds stand out thanks to their nifty charging case, which has a similar design to a classic Zippo lighter. It’s especially nice, since most manufacturers have been leaning towards plastic, which isn’t the most impressive material. We’ll have to wait and see if they check all the boxes for what we look for in true-wireless earbuds, but they look promising.

Pricing for these earbuds is set to vary between $59 and $199, but more specific details are unknown at the time of this post. If these sound like something you’d be interested in, then make sure to keep an eye out for them when they release in early spring 2019.

There are four new models in the new the Klipsch T5 line, each sporting the patented oval ear tips Klipsch claims provide excellent isolation and comfort, which is good news for bass lovers as a bad seal can wreak havoc on your low end. If you’re not yet interested in true wireless earbuds, there will be three other versions of the T5, including an active version, professional version, and a wired version.

Klipsch might have some great headphones, but the company is known for its speakers. While there are no images just yet of the new speakers, it’s safe to assume they’ll have the same design language as the models currently available. This means plenty of wood and some classic brass accents.

That said, one of the new speakers, called The Three, is supposed to debut with a new finish. While we’ll have to wait for the show floor to see exactly what that means, it’s exciting Klipsch is continuing to make its classic speaker compatible with modern tech. Depending on the model, these will range from $149 to $499 and will also be available for purchase in the spring of 2019.

Last but not least, Klipsch also announced five brand new sound bars, which will significantly improve the audio coming from the built-in speakers on your TV. They will be between 40-54 inches in width depending on the model, and come with a few features home theater fans will appreciate.

If you want smart assistant functionality Klipsch has you covered, as the new speakers will be compatible with either Google Assistant, Amazon Alexa, or Airplay 2. They didn’t hold back on home theater features either, as you’ll be able to choose between DTS Virtual:X surround sound or even Dolby Atmos depending on how seriously you take your home theater setup.

The sound bars will range from $299 – $1,599 and will be available for purchase in spring 2019, though some of the models won’t be shipping until later this year around fall.

All of these products will be available to try in person on the show floor at CES 2019 in Las Vegas. If you’re not at there, don’t worry — we’ll have a team walking the floor to check out everything audio.

5 hours ago
Latest
Save $240 on the HP Pro c640, and more top Chromebook deals
by Matt HorneSeptember 23, 2020341 shares
The best Android smartphones in India you can get
by Dhruv BhutaniSeptember 22, 20201956 shares
You Might Like
This week in Android: Samsung Galaxy S20 FE announcement and giveaway
by Jonathan Feist47 minutes ago
Samsung Galaxy S20 FE international giveaway!
by Team AA5 hours ago431 shares
OnePlus Watch: All the rumors and what we want to see
by Adamya Sharma8 hours ago176 shares
We asked, you told us: Most of you want a budget OnePlus Nord in the US
by C. Scott Brown22 hours ago93 shares