Which Android phones charge the fastest?

Update: After speaking directly with Oppo it seems that the USB dongle we were using to measure the current and voltage was interfering with the VOOC quick charger system, as it uses a special 7-pin cable and the charging will only work when using that cable directly connected to the charger. So we re-ran the tests and updated the article.

There is no getting away from it (not yet), every mobile device needs to be charged up. That is because they all have batteries, rechargeable batteries that give us a certain number of hours of use and then these useful battery cells needs to be replenished. It is something you probably do every day, almost unconsciously. You plug in your phone and let it charge, while you get on with other things. So since it is something that we all do daily, it would be good to know which phones charge the quickest!

Before we dive into the results of our testing, let’s have a quick look a the charging cycle for Li-ion batteries and see how we tested the charging of each phone. The charging cycle for a smartphone battery is performed in two stages. This is true for standard wired charging, for quick charging and for wireless charging. During the first stage a constant current is applied to the battery. Then when the battery is around 70% to 80% full (depending on the exact battery design) the current will be lowered but the voltage will remain the same. This means that the phone will always charge faster from 0% to 80% and then slower for the last 20%.

As well as measuring the total charge time, I also measure the current and voltage levels drawn by the phone from the charger. To do this I used an inline USB  volt and amp meter (pictured below). At regular intervals I noted down the time, the battery level, the voltage reading and the current level. For a our testing we picked a variety of phones with the aim of covering some of the top flagship devices of 2015, plus some which offer various quick charging technologies. The list in alphabetical order is:

And here is a graph of the battery sizes in mAh:

The Oppo R5 has the smallest battery, while the Moto X Force has the largest. It is also worth noting that the median battery size is 3000 mAh as found in the Note 5, the LG G4 and the Moto X Style, to name a few.

So batteries provide electrical power to our smartphones and to replenish those batteries they need to be re-charged, power needs to be put back into storage. To do that you connect your phone to a charger, normally the one that came with the phone. The charger has two characteristics which define how much power it can provide to the battery, the output voltage and the output current. The level of electrical power being pushed into the battery is measured in watts, and watts is calculated by multiplying the volts and the current.

For those interested in the technical bits, it is interesting to see how the phone charge. Here is a graph of the watts and battery level over time for the Huawei Mate S: For phones which support Quick Charge 2.0 (or a variation of it) the initial wattage being pumped into the battery is much higher as the voltage used is around 9V and not 5V. Here is the charging graph for the HTC One (M9): As you can see the initial power level is 12 watts, 4.5 watts more than the Mate S. This level is maintained for 40 minutes when it then drops slightly to 10 watts until the phone reaches 70%, then the power drops steadily as the battery level approaches 100%.

The phone with the most interesting charging cycle is the Moto X Force. It starts charging with 8.97V at 2.23A, which is 20 watts: 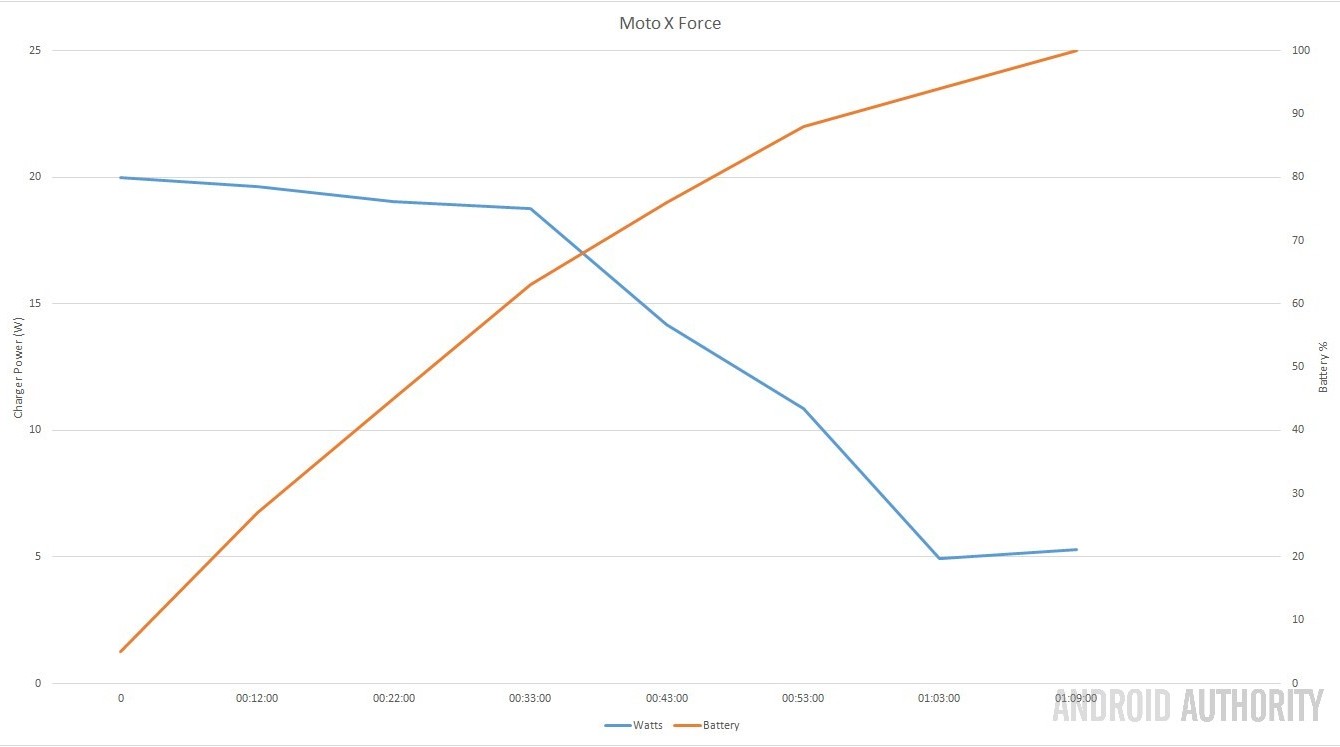 Once the battery reaches around 65% the current level starts to drop, however even at its lowest level, it is still consuming over 5 watts. The result, as we will see in a moment, is a very fast charge time.

Here are some graphs for a few of the other phones in our test group: So which phone charges the fastest? Is it a phone with a small battery like the Oppo R5 or the Huawei Mate S? Or is it a phone that pumps the most watts into the battery? Let’s see:

So, the top five fastest charging phones are the Moto X Force, the Oppo R5, the Oppo R7, the Moto X Style and the LG V10. The slowest three are the Huawei Mate S, the Sony Xperia Z5 and the BlackBerry Priv.

The Moto X Force is really a surprise winner in that it has the biggest battery, so you might have thought that it would take the longest to charge, but because it uses at to 20 watts of power during the initial stages of the charge cycle, it is able to beat all the other devices including those using QC 2.0 at 9V and 1.5A, and those with smaller batteries.

Since we know the battery sizes and we know how long it takes to charge it phone, we can also see which phone increases the battery level the most in one minute: The Moto X Force is again the winner, followed by the Moto X Style and the LG V10, however further down the list we can see some changes. For example, the BlackBerry Priv takes the longest to charge its battery, in actual minutes, however it is charging faster than the Sony Xperia Z5 and the Huawei Mate S.

As for the Oppo R5, Oppo has a quick charging system called VOOC which is meant to operate at 5V and 4A (i.e. 20 watts).

So the clear winner of is the Moto X Force. It has a big battery and a powerful charging cycle. It really is ahead of the field. Oppo does well with its VOOC fast charging system, however the total charge times for the R5 and R7 are also lower because of the smaller battery sizes. In terms of charging rate the Moto X Style performs well and comes in second to the Moto X Force.

LG makes a good showing with all three of its phones in our group appearing in the top 8, including the LG G3. The Galaxy Note 5 also does well taking 4th place in terms of charging rate. Unfortunately the two Sony phones don’t do that well and neither does the BlackBerry.

Now we know how long these phones take to charge, but how long can the battery last? We have tested six of the best flagship devices for our Best of Android 2015 series, so why not head over to this post to see the results!

So, what do you think, does the charging time of a phone altering your buying decision? Is it an important factor for you? Please let me know in the comments below.