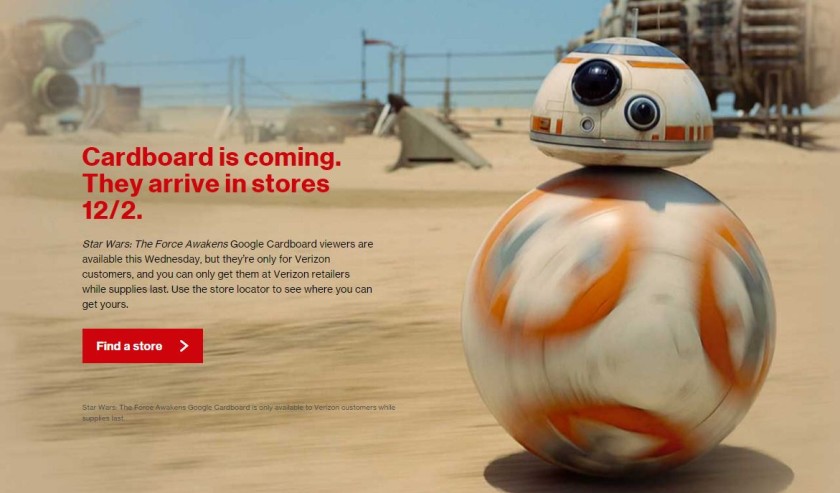 Let’s not lie to ourselves. Virtual reality is the Next Big Thing. Console-dependent gaming platforms like PlayStation and Xbox may be aggressively turning a blind eye to the looming threat of Oculus Rift, but mobile companies need not be afraid: the VR revolution is looking to be very mobile-friendly.

After licking it’s thumb and holding it aloft to gauge the direction of cultural winds, Verizon has made the wise decision to throw their lot in with both the reignited Star Wars franchise and VR technology. Tomorrow, December 2, Verizon is releasing a line of Force Awakens Google Cardboard VR headsets in their stores. It looks like there are a range of models available that include old favorites like R2-D2 and Stormtrooper themes, while bringing the new BB-8 and Kylo Ren textures to the table.

It’s no secret that while VR headsets allow the viewer to see awesome things, they in no way increase how awesome the viewer looks. You might as well slap some cool Star Wars paint on that device you’ve got strapped to your face. And let’s be honest, the resale value on these limited edition headsets is going to be insane two decades from now.

If you want to get your hands on one, you’ve got to be a Verizon subscriber. Head over to your local store to get your Star Wars Google Cardboard VR headset!

News
Tagged:
Verizon
Verizon
Comments
Read comments
You Might Like
US carriers ditch effort to build Android’s answer to iMessage
by Jon FingasApril 14, 2021
How to switch cell phone carriers
by Ryan HainesApril 12, 2021
PSA: Verizon is recalling millions of hotspots due to electrical fire hazards
by C. Scott BrownApril 8, 2021
Here are all the US cities with 5G coverage
by Mitja RutnikApril 2, 2021
Latest
How to stop Android apps running in the background
by John DyeApril 12, 2021
How to block a phone number on your Android phone
by Team AAApril 12, 2021