John Dye
» Are you overpaying for mobile service? Compare your plan to $15 per month. (AAPartners) 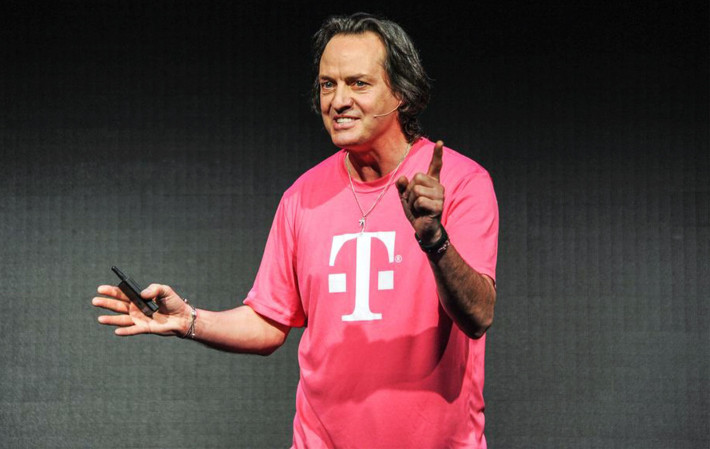 T-Mobile is getting into the holiday spirit by producing a gleefully aggressive music video that flips the bird to Sprint, Verizon, and AT&T. It’s an interesting move, but we should almost expect it at this point. After all, the T-Mobile CEO John Legere has been building something of a celebrity status out of his own audacity. Like him or hate him, his strategy seems to be working. Watch the video below.

Just a few years ago, T-Mobile looked like it was on the ropes. Failing ad campaigns and a dwindling subscriber listings left some theorizing that the nation’s fourth largest carrier wasn’t long for this world. The company knew it had to change, and that change came in the form of their new CEO (as well as extensive HR restructuring). Legere immediately took to the public stage with all the swagger of a rock star and the arrogance of an underdog who doesn’t know when to give up.

To Legere’s team, it seemed like the whole point of contracts was to lock subscribers into plans even after they had become unsatisfied with them. In a move of business acumen and PR genius, Legere spearheaded a corporate shift that axed contracts, pushed unlimited data plans, and paid subscribers to switch from the competition. And it worked. People liked the idea of a contractless carrier. T-Mobile (now the third-largest carrier in the nation) is cashing in their recent momentum by heckling the competition like a high school sports team.

In a musical number sure to draw sympathy from those currently being gouged by major carriers, the “Un-carrier” CEO playfully bashes T-Mobile’s competitors with a rewritten holiday medley. Instead of Santa Claus and the Little Drummer Boy, we get lyrics like “You better watch out / You’d better change fast / Consumers won’t let your duopoly last / Un-carrier is coming to town.”

I won’t spoil anything else for you. Worth a look and a laugh even if you’re not a T-Mobile fan. When you’re done watching, let us know what you thought in the comments. Also, what’s your opinion of Legere and his unconventional business tactics?

August 2, 2020
Promoted
OPPO Reno4: Equipped with a smart sensor from the future
by AA Partners16 hours ago14 shares
You Might Like
Sprint brand is gone, as its stores turn into T-Mobile locations (Updated)
by John Callaham16 hours ago308 shares
You told us: By far, T-Mobile is the most popular carrier with AA readers
by Jimmy WestenbergAugust 1, 202011 shares
T-Mobile buyer’s guide: plans, perks, and more
by Ryan HainesJuly 29, 202073 shares
Poll: Which US carrier do you recommend?
by Jimmy WestenbergJuly 28, 20209 shares