Earlier this year OnePlus unveiled the follow-up to its wildly received OnePlus One, aptly named the OnePlus 2. While the OnePlus 2 has arguably failed to live up to its “flagship killer” status, OnePlus still has another ace up its sleeve, recently unveiling a second, even more affordable alternative from OnePlus.

Buy the OnePlus X on eBay

It remains unseen whether or not OnePlus’s latest handset will prove to be more successful than the OnePlus 2, though its pricing and aesthetics certainly are great steps in the right direct. We’ll have a full review of the handset in the not too distant future, b ut in the meantime here is a quick look and unboxing of the OnePlus X! 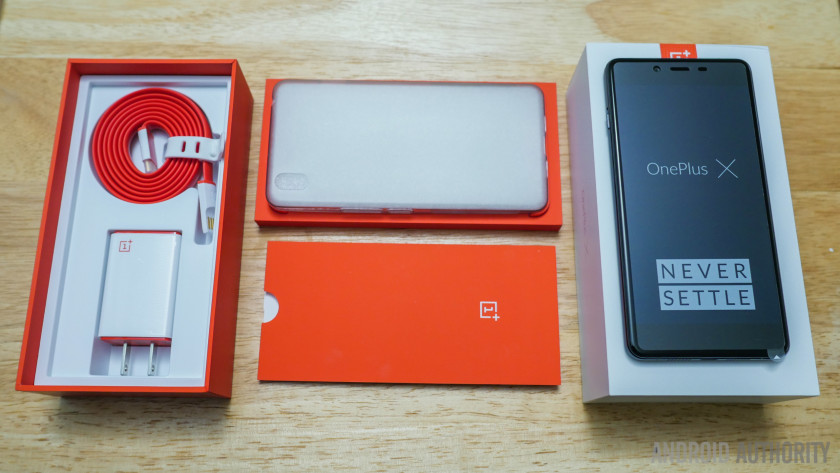 As far as the unboxing is concerned, it has been a rather conventional affair, but OnePlus does offer a few useful extras with the device. Included in the box is the wall charger and the flat, red, microUSB cable that has been a signature of OnePlus smartphones, and of course, microUSB means that the OnePlus X doesn’t sport the latest USB Type-C port, unlike its flagship counterpart. Also useful is the availability of a light weight plastic case that will allow for a little bit of protection against any accidental bumps or drops. Apart from that, the usual documentation is also to be found here. 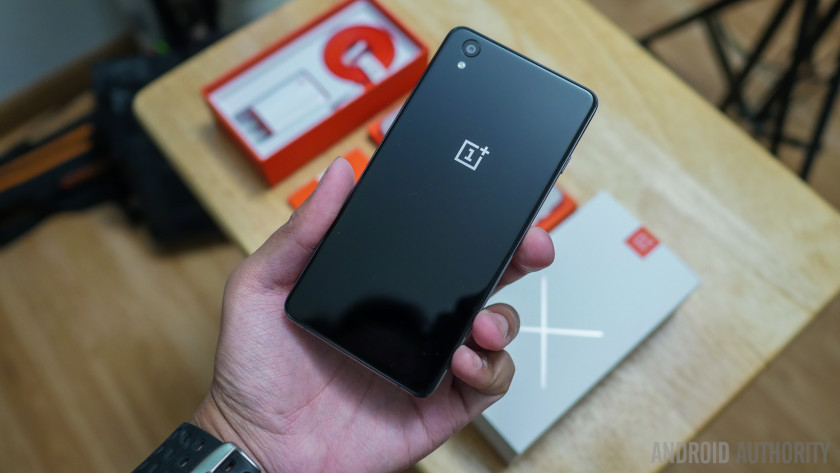 When holding the phone for the first time, the first thing you will notice is how premium this device feels, beyond what its price point would suggest. A metal chassis holds together two glass panels, and is a design language that will certainly remind you of the Sony Xperia flagships. There are some differentiating factors here however, such as the micro cuts seen in the metal sides, which also happens to help with the handling.

Of course, handling isn’t much of a concern with the OnePlus X, given its relatively compact size, courtesy of a 5-inch display, allowing for comfortable one-handed use. Granted, there isn’t a shortage of smartphones that fall in this size range, but the general trend in 2015 has been leaning towards the larger side of things, and as such, it is certainly refreshing to see OnePlus, with there second offering of the year, stick to the smaller size category. 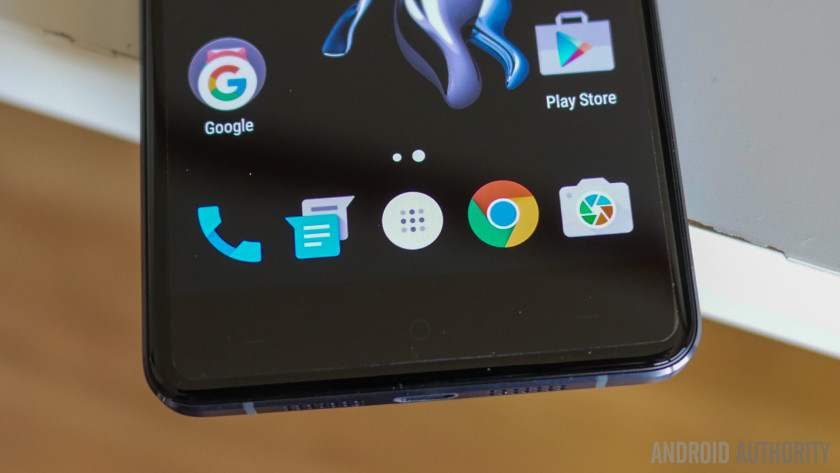 If you are familiar with Oxygen OS, you will know that you have the option to choose between on-screen navigation keys or capacitive keys, and that feature returns with the OnePlus X. However, it is worth mentioning that, given the relatively thin bottom chin of the device, the capacitive keys do fall quite close to the bottom edge of the front, and it does seem like you have to reach really far down to get to these buttons. There has been no issues as far as their response is concerned, but the positioning will certainly take some getting used to. 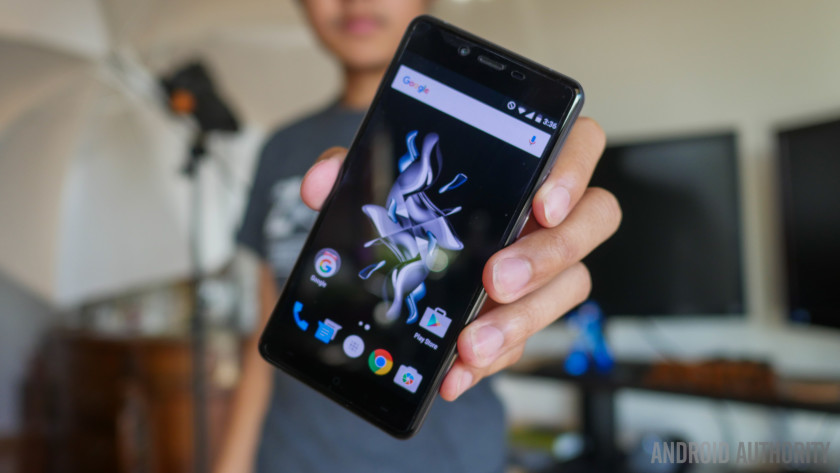 The OnePlus X comes with a 5-inch AMOLED display with a Full HD resolution, resulting in a pixel density of 441 ppi. The advantages of an AMOLED construction are seen right off the bat, with Dark Mode being the default selection in Oxygen OS, which should contribute to the battery life, given that not all the pixels are being used when in this mode.

Under the hood is a very familiar processing package, with the OnePlus X coming with the quad-core Qualcomm Snapdragon 801 processor, clocked at 2.3 GHz, and backed by the Adreno 330 GPU and 3 GB of RAM. This processing package was the 2014 flagship standard, and was also found with the OnePlus One, save for the additional gig of RAM, and remains very capable. OnePlus decided to go with this older processing package instead of current mid-range standard in the Snapdragon 617, since they found the Snapdragon 801 to still perform better than the former in their testing. Everything has been smooth so far in terms of performance, but we will of course, be running the device through its paces in the upcoming full review. 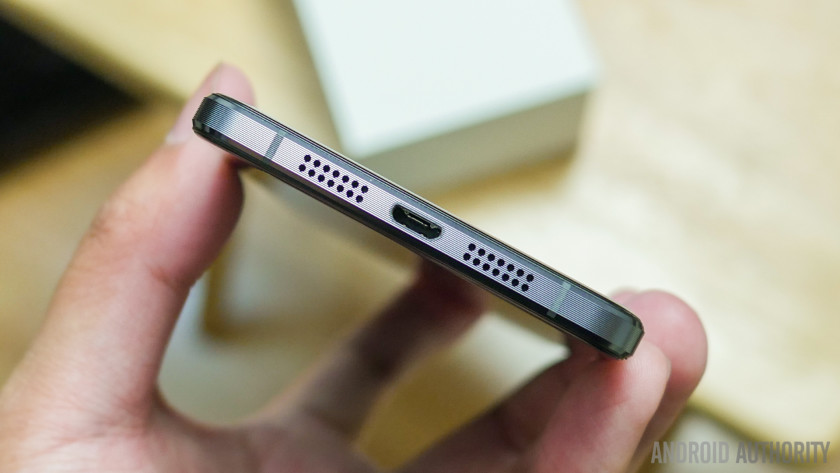 Not a lot of hardware features from the OnePlus 2 make their way over to the OnePlus X, with the latter not coming with a fingerprint scanner, and OnePlus has also decided to not adopt the latest USB Type-C standard with this device. Even with the more traditional microUSB port, in my testing, it seems like there are no fast charging capabilities to be had here, which is quite disappointing. Like the OnePlus 2, there is no NFC here either. One feature that is retained however is the Alert Slider, on the left side of the phone, that lets you select between All, Priority, and None, for notification management, without needing to turn on the phone. One useful addition with the OnePlus X that isn’t even available with other OnePlus releases is expandable storage, which is certainly going to be necessary, since the only in-built storage option is 16 GB. While the OnePlus X comes with dual SIM capabilities, the second SIM slot also functions as a microSD card slot, so users will have to make the choice between dual SIMs and expandable storage by up to an additional 128 GB. 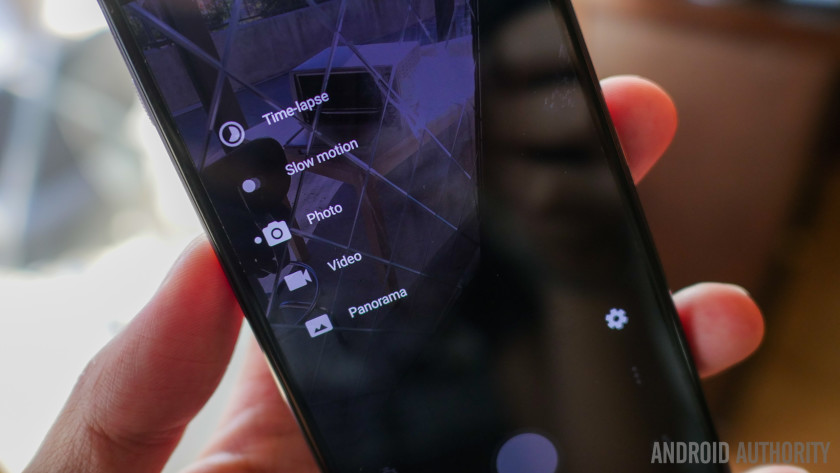 The OnePlus X comes with a 13 MP primary camera and an 8 MP front-facing shooter, which we will be testing more thoroughly in the upcoming comprehensive review. As far as the camera application is concerned, it is very similar to what is found with the OnePlus 2, allowing you to change modes by swiping on the viewfinder. The issue here is that while swiping between the modes in the landscape orientation, when you get to Panorama, the viewfinder changes to the portrait orientation, which does take some getting used to. It’s not too much of a big deal though, and it helps that the Panorama mode is at the bottom of the list. 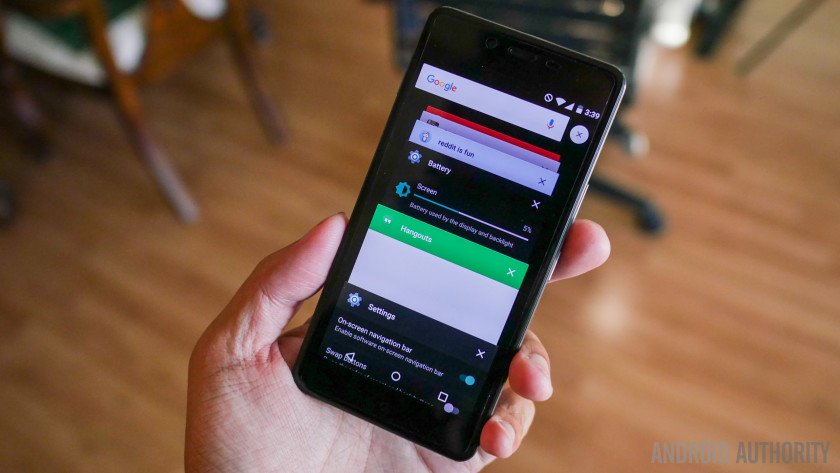 On the software side of things, you once again get the Oxygen OS, with the OnePlus X retaining all the software capabilities from the OnePlus 2, such as double tap to wake, selecting between capacitive or on-screen navigation keys, and Shelf. As mentioned, Dark Mode is enabled by default, and that is a really good choice to have on the AMOLED screen. Ultimately, you get a really stock-like Android experience here, with all of the expected elements from Android Lollipop.

So, there you have it for this quick look at the OnePlus X! The best part about the OnePlus X has to be its price point of $250. Granted, OnePlus’ infamous invitation system returns here, but OnePlus has said that it will last for only a month or so, and it should get much easier to get your hands on the device after that. This affordable price will get you a phone that, so far, seems to be quite premium in its look and feel, and manages to provide some features that even other flagship smartphones haven’t been able to offer, like expandable storage.

Opinions on the battery life and camera quality are something that we will reserve for the upcoming review, but thus far, we do like what we see with the OnePlus X.

July 5, 2020
Trending
Manage your backup any time, any place with AnyBackup
by AA PartnersJune 26, 2020125 shares
You Might Like
OnePlus Nord launch date leaks via Amazon India
by Hadlee Simons17 hours ago171 shares
We asked, you told us: The OnePlus Nord will be a worthy successor to OnePlus X
by Adamya Sharma18 hours ago111 shares
Oxygen OS vs One UI: A thorough comparison of the two popular Android skins
by C. Scott BrownJuly 5, 20202525 shares
I wish the OnePlus 8 Pro was more like the Oppo Find X2 Pro
by David ImelJuly 5, 20201063 shares