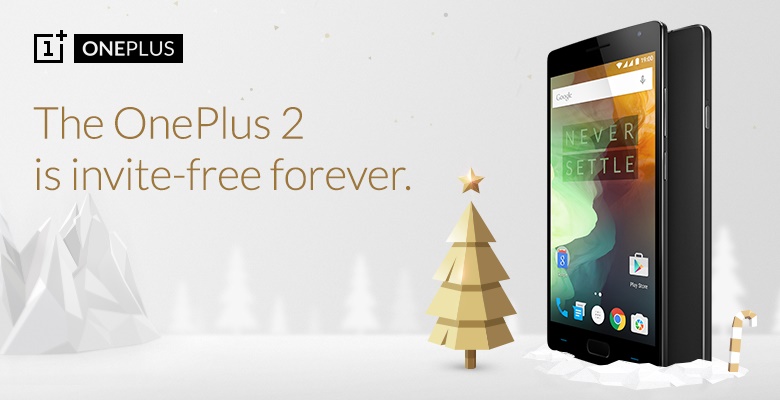 While the OnePlus 2 hasn’t been met with quite as much enthusiasm as its predecessor, it’s still a solidly spec’d device, especially considering pricing starts at just $329 for the base 16GB model and $389 for the 64GB version. The biggest downside however, is OnePlus’ invite system. Thankfully, this is a burden we won’t have to deal with much longer.

In a new official forum post, OnePlus has announced that it is ditching invites for the OnePlus 2, and not just for a short period of time: we’re talking permanently. The invite-free sales will begin at midnight on December 5th. In addition, OnePlus will also sell the OnePlus X invite free from the 5th to the 7th, though the mid-ranger will require invites again after that.

This is certainly a big change in direction for OnePlus, and sees a much shorter turnaround from invite-to-invite-free than we saw with the OnePlus One. Of course, just because the phone won’t require an invite doesn’t necessarily mean that it won’t suffer from stock shortages and other related issues that will slow down the time it takes to get the phone into your hands. For example, the 16GB model is currently out of stock, and it’s not 100% clear when it will return.

So, if you’ve been dreaming of getting your hands on the OnePlus 2 or the OnePlus X without invite, mark your calendars for December 5th. During the 5th through the 7th OnePlus will also be discounting down a number of its accessories just in time for the holidays.

Anyone planning on getting a OnePlus 2 once it goes invite free? Let us know your thoughts down in the comments.

Privacy has become one of the greatest concerns of our day, although it’s something I’m sure we’d rather all not think too much about. Today, everyone carries around their primary point of weakness in their …
Latest
15 best Android fitness apps for Android
by Joe HindyOctober 28, 2020906 shares
10 best email apps for Android to manage your inbox
by Joe HindyOctober 26, 2020843 shares
You Might Like
Latest OnePlus 8T update improves power consumption, fixes Bluetooth latency
by Andy Walker13 hours ago
Here’s a sneak peek at the design of the OnePlus 8T Cyberpunk 2077 Edition
by Adamya Sharma18 hours ago64 shares
Oxygen OS Open Beta 19 rolls out to the OnePlus 7, OnePlus 7 Pro
by Team AA20 hours ago1402 shares
You can now update OnePlus Buds without a OnePlus phone: Here’s how it works
by C. Scott BrownOctober 29, 202036 shares