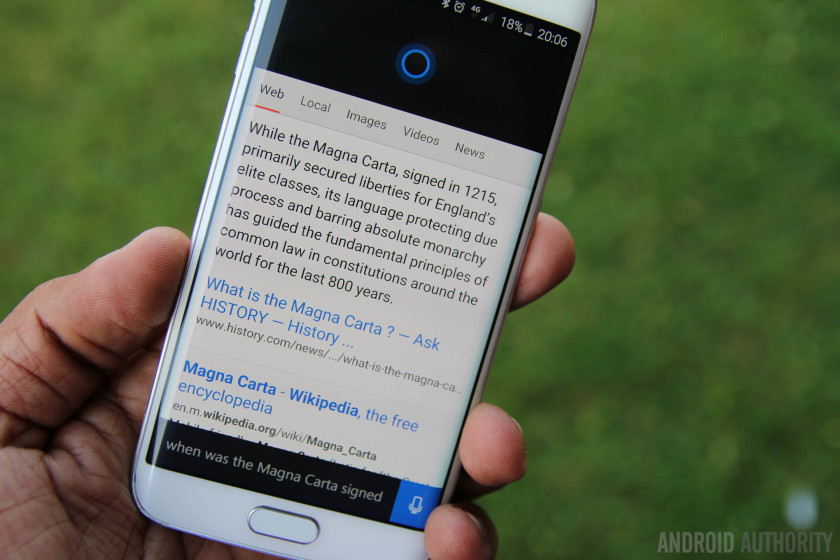 After a few months of beta testing, Microsoft has finally launched its Cortana digital assistant application on Android. Microsoft launched a closed beta test for the app back in July, then opened it up to the public later in August. Now the voice assistant is available for all to download from the Google Play Store.

With Cortana on Android, you’ll be able to set location and time reminders, track packages, and get all kinds of information and answers whenever you need it. And if you own a Windows 10 PC, Cortana will help you out even more. The voice assistant will allow you to send text message replies from your PC, which will definitely come in handy for many users out there. If you’ve been using Cortana beta for the past few months, there aren’t really any notable new features that come along with this stable release.

Additionally, Microsoft has announced that Cortana will be included in the OnePlus One’s upcoming Cyanogen OS 12.1.1 OTA update later in December. This means Cortana on the OnePlus One will be able to toggle network modes, power down your phone, and even turn on Quiet Mode. OnePlus One users will also be able to say “Hey, Cortana” from any screen (even from within another app) and the voice assistant will answer. Other Android users can use this functionality as well, though they need to be in the Cortana app or on their home screens.

Cortana is now available in the Play Store, so hit up the link below if you’re interested! Have you been using Cortana? If so, how are you liking it?

Black Friday used to be just a US shopping event. However, it has now spread all over the world. That means there are lots of early Black Friday UK deals to check out right now. Stick …
Latest
10 best NEW Android games from November 2020
by Joe HindyNovember 26, 20202931 shares
15 best RPGs for Android for both jRPG and action RPG fans
by Joe HindyNovember 26, 20201420 shares
You Might Like
Today only: Buy a OnePlus 8 Pro and get a OnePlus 7T for $1!
by Matt Horne22 hours ago
Microsoft could bring Android apps to Windows 10 (Update: More info)
by Hadlee SimonsNovember 27, 20201625 shares
OnePlus 8 series gets bug fixes, November security patch in latest stable update
by Hadlee SimonsNovember 27, 2020642 shares
The T-Mobile OnePlus 8T finally gets an always-on-display in latest update
by Team AANovember 25, 202016 shares