The Marshall London is a unique handset that is aimed at audophiles, and it gets a lot right to that end. Unfortunately, it also has a number of flaws that keep it from being an exceptional device.

The Marshall London is a unique handset that is aimed at audophiles, and it gets a lot right to that end. Unfortunately, it also has a number of flaws that keep it from being an exceptional device.

In an industry where all manufacturers aim to cater to the general consumer, is there room for a device that makes audio its main focus? That’s a good question.

The Marshall London comes from a popular music company and certainly offers a very unique experience. Before anything, I would like to start by apologizing for how long after our unboxing and first impressions it took to publish this review. A ton of new Android devices were announced and released, making it hard to prioritize this specific device over others. This does come with a benefit, though. I used this smartphone as my daily driver for much longer, and I am ready to tell you all about it in full detail. Let’s get started.

Those who usually complain abut copycats in the mobile market will find the Marshall London to be quite refreshing. This phone was built by Marshall from the ground up, and definitely takes on many of the company’s iconic looks. For starters, their logo is right below that 4.7-inch display, above the dual front-facing speakers. There’s also a unique white line that outlines the whole front of the phone. 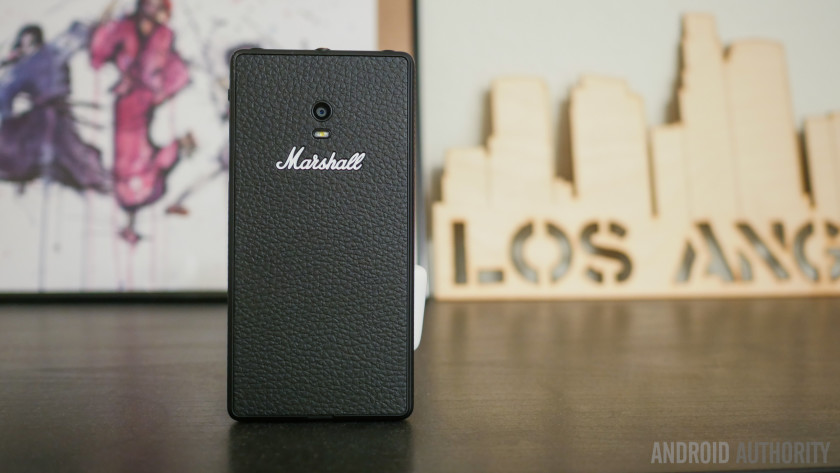 Moving into the sides we can start feeling the rubberized material Marshall is so famous for using with its amplifiers and speakers. Some of you may not like non-metallic materials, but I have to say this provides a great grip on the phone. On the right we can also see the power button on the higher part of the body, with a volume roller (yes, roller) right below it. This analog style control can even be pressed for further functionality. It is on the top side that we start seeing the luring parts about the Marshall London. This thing has two audio jacks, which can be used for both listening and recording. There’s also a circular Marshall button up there, which can be used to trigger the company’s official music app. As we move to the back we can find more of that rubberized material. But the interesting part is that there is actually a removable back here, something that is becoming more of a dying breed as this industry evolves. Under the backing we can find a microSD card slot and a nanoSIM card tray, along with a removable battery. But get this, the battery literally has “Long Live Rock & Roll” written on it. Pretty darn awesome, if you ask me! All in all, I have to say I have really enjoyed how uniquely designed this device is. Marshall has done a great job at translating their iconic design into the smartphone world, something not every manufacturer can achieve. And handling is about as good as you can get in modern times, thanks to that 4.7-inch display.

I do have to say the removable back cover is a little flimsier than I would like. It seems like it could be easily broken, or those latches could crack, deeming it unusable. But smart touches like the volume dial make it clear that Marshall really wanted to put its stamp on this phone. And that, they did.

As we mentioned above, this phone comes with a handy 4.7-inch display, but what else can we tell you about the screen? Well, it does have an IPS panel, which gives it more true-to-life colors, but the sad part here is that it sports a 720p resolution. This is definitely the first sign of the phone’s mid-range specifications. That said, this really isn’t a bad display, by any means. We would just like you to keep in mind this phone is also not intended as a flagship competitor; it lives in its own realm. When brightness is set at its highest, you can obviously tell there is a noticeable warm hue over everything, making the white areas look more taupe. By the way, this brightness makes the phone readable during daylight, but it definitely isn’t up there with other IPS displays we have seen in the past.

The lower resolution also becomes very noticeable when reading text and other sharp content. 720p is not horrible, but it is definitely behind the times by now.

The mid-to-low range trend continues as we move on to performance. There is a Snapdragon 410 powering the Marshall London, backed by an Adreno 306 GPU and 2 GB of RAM. As you can expect, this processing package is far from being considered premium, and the components definitely reflect in performance. 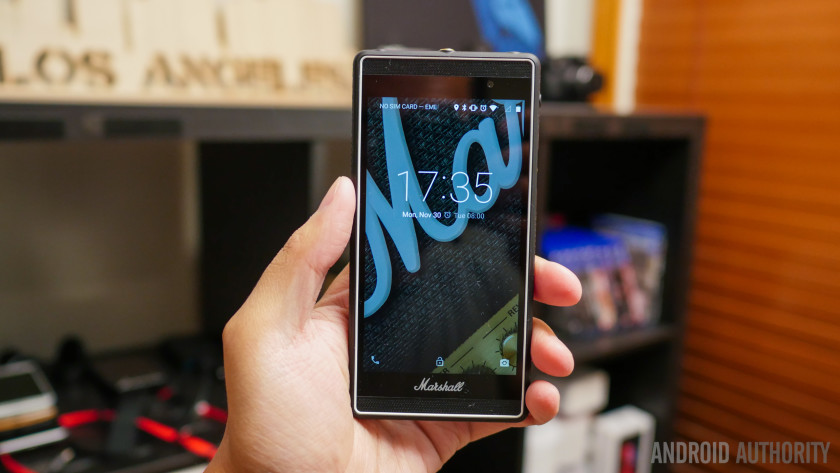 We can find occasional stutters even going through the general UI, but the phone is able to perform most simple tasks with little to no problem. After all, it’s not being pulled down by a higher resolution display and other resource-heavy components. You can really start noticing the weight that higher-demand tasks carry, though. Games did have higher load times and periodic crashes, for example.

For regular tasks, it worked fine, but we did need to get used to the extra time it takes to open apps or do other simple jobs. What the Marshall London does have going for it is its near-stock Android experience. Marshall didn’t try too hard to make Google’s OS different, something that might have helped keep the phone snappier.

Just keep in mind you would be getting a mid-to-low tier performance out of this phone. That’s really the important part. 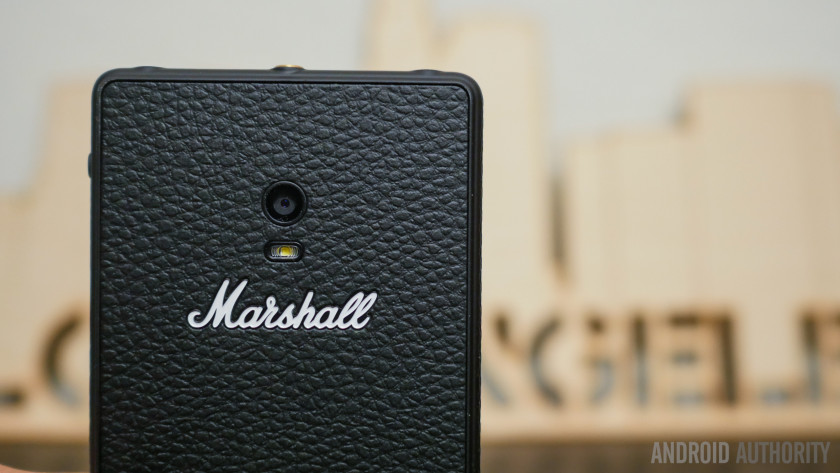 The main focus here is, of course, the audio, but we will get to that in a bit. First let’s talk more about that removable back and what is underneath it. That microSD card slot makes the internal 16 GB expandable by quite a bit, which means you can fit plenty high-quality audio files in this phone.

The battery is a 2500 mAh unit. Definitely not bad when considering the lower-end specs. And that battery actually works quite well; one of my best days with it I used it for 14 hours and about 4 hours of screen-on time. Couple that battery performance with the ability to replace the battery at will and you have a winner.

NFC is missing, which is definitely a bummer, but many of us can live without it. Also keep in mind this phone is not necessarily made for America, which means it will work only with GSM and HSPA+ networks when imported to (or released in) the States. OK, now we can talk about audio. Let’s start off with the first thing you will notice – those front-facing speakers. These things are great! Marshall managed to give its device stereo sound, as well as a very full-bodied audio that makes it unnecessary to use headphones during gaming or sharing videos with friends.

But when you do want a full audio experience, there are those two audio jacks on top. This allows users to share music, with a built-in Cirrus Logic sound card providing full connectivity to both jacks. And this is a full set-up for both users. The phone provides full audio quality for both outputs, and each person would have its own volume control. 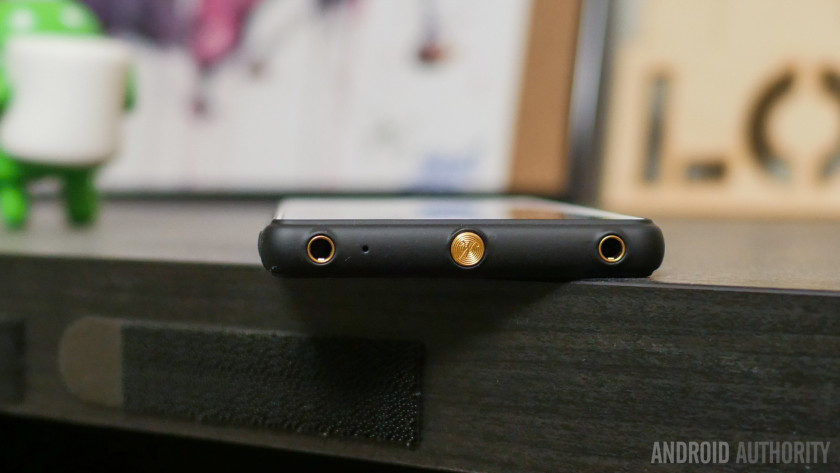 The great part about this phone is that it can mold the sound to your liking. The controls in the equalizer can change your tunes very dramatically, whether you want low end bass or higher end peaks. The audio experience is very robust here… definitely in line with the history the company has created for itself. Professionals will have a blast with it, as well as casual audio enthusiasts.

You aren’t expecting a great camera out of this phone, right? If you are, disappointment awaits. The Marshall London sports an 8 MP rear camera and a 2 MP front-facing camera that will get the job done, but definitely won’t take you the extra mile.

It does use the Google Camera app, so you will have access to all that this entails. It features abilities like Lens Blur, Photo Sphere and HDR. But the camera is still a bit slow and under-performing, something that definitely shows in the actual pictures. These tend to be washed out and don’t showcase enough detail and sharpness. Color reproduction is actually pretty good, but overall we didn’t walk out of this review with a good impression of the camera.

I would say this is the bare minimum camera for the social media picture taker. It will get the job done, but it’s no over achiever.

Marshall will please many user with a mostly stock version of Android. The company chose to make specific applications to improve its experience, as opposed to changing the core of the software. There are a couple additions, though, like the unique power up and down animations, as well as a very nice guitar riff used for notifications. Lollipop brings the typical home screens, app drawer and notification drop-down menu with a Quick Settings panel.

Marshall’s unique applications include an audio app (equalizer and sound settings), which is even able to tap into other services, such as Google Play Music and Spotify. This app was a bit wonky in the beginning, but a recent update seems to have fixed all the problems. Users can even access a loop stack for creating music, and there’s also a full-blown DJ application for the more experienced musicians. I personally loved a little game called Rockabilly Bros, where you can manage a band and the venue where they play.

All in all, I am a fan of Marshall’s attempt to keep Android as pure as possible. They found a great balance in which they can add in their own touch without becoming obtrusive. 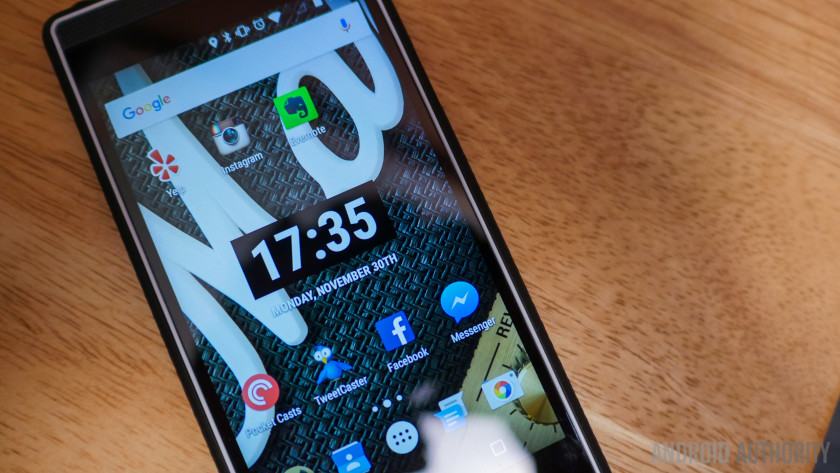 You can get the Marshall London in the UK and European markets for prices that translate to at least $499. This would be the projected price for the phone when/if it comes to the USA. It’s a bit of a high price, but some audio enthusiasts may think a device like this is priceless. As always, it depends on what you are looking for.

Marshall definitely took a risk by diving into the smartphone world, especially in such a saturated market, but this may also work to their advantage. For one, costs of making a mid-range smartphone have gone down, which allows more companies to specialize in certain departments. For Marshall, audio is the obvious focus, something that definitely shows in the London. 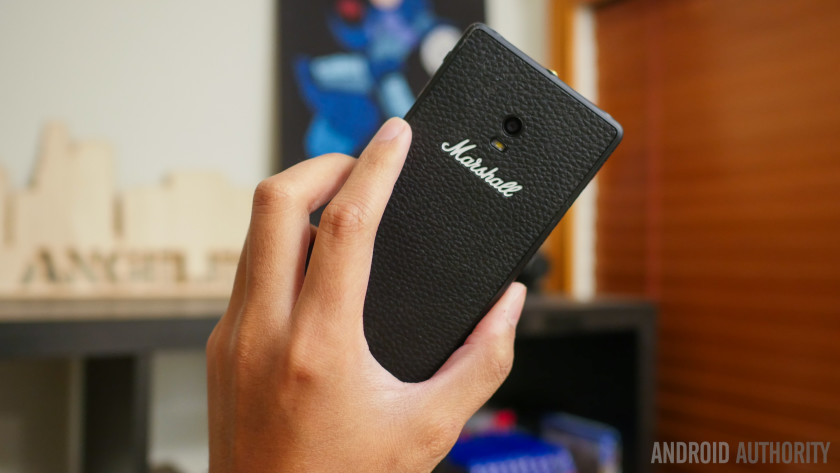 Sharing your tunes with friends is one thing, but going as far as adding to the experience with equalizers, recording, music creation and other apps makes the Marshall London a benchmark for audiophiles.

With that said, we also have to mention casual smartphone users will have to cut too many corners to live with superior sound. That’s the main issue here, Marshall took a generic phone and put its name on it. Cool apps and a good design won’t be enough to put this phone in the hands of people outside the target niche. Especially when considering that price.

We certainly love what Marshall has done here, but are also hoping a follow-up will improve on the aspects that truly matter to the Android faithful.