How to get paid Android apps for free

It’s human nature to want something for nothing. However, piracy really hurts developers, and it even hurts the Android ecosystem as a whole. For those wanting to balance those two desires – the attraction to free deals and the aversion to hurting developers – a few options exist that let you have the best of both worlds. In this article, we’ll take a look at some of the ways you can get paid Android apps for free without resorting to piracy. 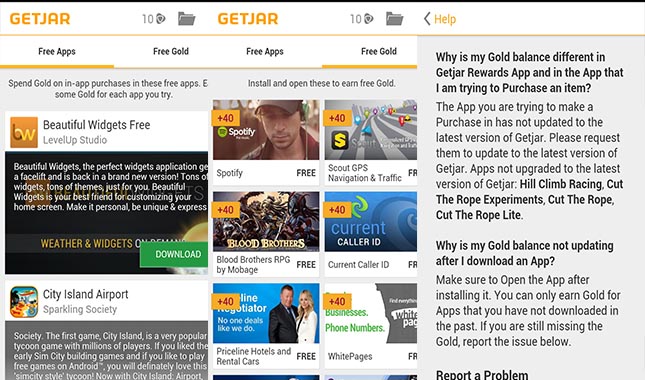 GetJar is the largest independent Android app store outside of the Google Play Store. They’ve been in business since 2004, which means GetJar has developed alongside the smartphone industry as a whole.

GetJar was originally created as a developers’ beta-testing platform. It was designed by developers for developers, and their model has remained developer-friendly to this day. The store app, which cannot be found in the Google Play Store, offers an expansive listing of paid apps for the low, low price of Free, and you can take advantage of these offers by visiting their website.

Using a third party store does come with its own risks, however. The Google Play Store heavily regulates what apps are made available and carefully screens out malware. With GetJar, you can’t expect the same level of security that you might be used to. Use discretion when getting apps from any third party store.

Amazon Underground was recently introduced as an evolution of the company’s free app of the day program. Not only do you have access to a massive index of paid apps for free, Amazon Underground even makes some in-app purchases available at no additional cost.

So how do devs make money? Underground uses a very different payment strategy than has been conventionally used by smartphone and tablet app providers. Amazon Underground lets you use the apps for free and pays the developers based on how many minutes you use the app. In theory, this encourages app developers to make apps that are consistently engaging and bring users back for more. In reality, it’s not really certain whether this advantages developers or not. However, the only way to learn is to try it out. For now, Amazon Underground is offer tons of normally pricy apps for free. Best to take advantage of it while the getting is good!

The real bonus here is in the in-app purchase. This is a huge benefit to mobile gamers, as it deftly steps around those models that require you to buy coins or whatever for additional play. No more waiting around for 24 hours for more playtime to arrive, you can “purchase” as many in-app benefits as you want absolutely free. This perk varies from app to app, but most of the ones we tried out put no limit on in-app purchase quantity.

Google Play is still going to have a larger selection of apps, but if you’re looking to play without paying, Amazon Underground is hard to beat. It’s a simple little app. Periodically, Google will send you a question, and then they pay you Google Play store credits for your answers. Sometimes you get two or three a day, other times it might be a day or two between queries. Payouts vary widely, but most questions see you earning somewhere between $.10 and $.99.

This might not seem like much, but these payments can really add up quickly. I use Google Opinion Rewards almost daily, and as a result, it’s been quite a while since I paid for an app out of pocket. As long as you don’t mind offering up your personal spending habits and interests to the mighty hivemind of Google, this is an excellent way to build up some Googlebucks and turn yourself into a Google mogul. I’m currently sitting on a staggering portfolio of almost $6.00, and all I’ve had to do is periodically remind Google that I rarely go to Applebee’s, don’t watch many sports, and have never rooted for truffles.

Yes, they actually asked me when I last rooted for truffles. AppGratis offers a free app to its users every day and discounts on a wide selection of other apps.  Most of these deals are only twenty-four hours long, and the way this service benefits developers is that it helps unrecognized apps get attention. Developers who are struggling to get their game or application noticed will sign a deal with AppGratis allowing the company to make the app available for free through their services.

When you pirate an app, the developer always loses. However, if you help a new app get use and attention it otherwise wouldn’t have gotten, you’re really helping them out. AppGratis is a perfect marriage of free software and guilt-free availability. They’ve featured big name apps like Angry Birds and Whatsapp in the past, so you might as well check out what they’re offering. Who knows. The app you snag from them for free might just be the next major fad, and you’ll have the smug satisfaction of being in the know early with no damage to your wallet.

AppSales is a service that lets you build a wishlist of apps that you want but which you aren’t willing to fork over cash for. When one of your desired apps goes on sale, AppSales will let you know. By default, AppSales will alert you if an app on your wish list drops in price by a minimum of 25% and has seen 1,000 successful downloads at that price. You can adjust these options to fit your specific needs.

AppSales is the perfect option for the budget-conscious user who would prefer to wait for a deal than experience instant gratification. With this app price monitor, you can check out the history of any app’s selling price, and learn to anticipate price drops. This system combines really well with Google Opinion Rewards, as it lets you stretch your Google Play dollars much further.

You might not be able to legally get any specific app you want for free, but using these services on the regular can really up your odds of stumbling upon a killer deal and snatching it up. Some free app services come and go as legal agreements expire, but these have been chosen for their projected longevity and the amount of benefit they offer to regular users.

Did we miss anything though? What is your favorite way to ‘hack’ the system and get paid app content for free? Let us know in the comments!

Features
Tagged:
Amazon Underground, GetJar
Amazon UndergroundGetJar
Comments
Read comments
You Might Like
Google and Amazon need to learn to get along
by Adam DoudSeptember 24, 2017899 shares
5 Android apps you shouldn’t miss this week! – Android Apps Weekly
by Joe HindyMay 8, 2017284 shares
Amazon is shutting down its Underground Actually Free Android app program
by John CallahamApril 28, 2017455 shares
Get $5 credit when you download select games on Amazon Underground
by Kris CarlonMay 3, 201653 shares
Get the Android Authority app on Google Play
Sunday Giveaway