Back in October, a source in Pepsi leaked the news that the mega-corporation would be releasing their own line of Chinese-based mobile accessories and even their own smartphone. We got some preliminary specs on the device, but heard no further word on the so-called P1.

Now, however, it looks like world’s 29th largest business is ready to make headway in the mobile market. The official announcement of the phone took the form of the $19 billion company launching a crowdsourcing campaign on the Kickstarter-esque fundraising platform JD Finance. Now we have a better idea of what this phone will look like and what exactly will be under the hood. The one thing that remains to be seen is whether or not there will be enough interest in the device for the campaign to meet its goals. The Pepsi Phone will come with a 5.50-inch 1080p display and run an octa-core 1.7GHz MediaTek MT6792 processor. 2 gigs of RAM and 16 GB of internal storage are housed in a sleek metal frame and a 2.5D glass display cover.  The cameras are a 13 MP device on the back, and a 5 MP one for selfies. The battery is 3000 mAh, and a fingerprint scanner is mounted on the back side of the device. The P1 will run Android 5.1 Lollipop when it arrives and it looks like the price is going to be about $200. That’s some pretty impressive bang for your buck. 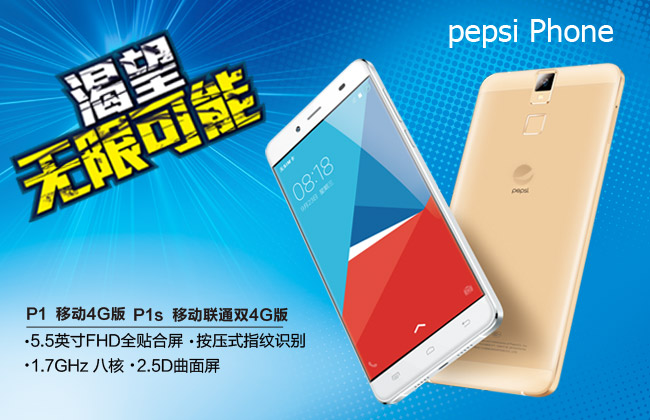 So far the project has raised $89,000, which is still a far cry from their $470,000 goal (3 million Yuan). The deadline for the fundraiser is December 3rd, so there’s no guarantee that this project will make it off the ground. The first 1000 supporters who pledged $78 (499 Yuan) will receive a P1 device for their support, which was a screaming deal that is sadly no longer available. However, those donating even just 1 Yuan have a chance of getting a device, as these supporters will go into a lottery in which 1 of every 500 will win a P1. Supporters pledging the full price of the device $203 (1299 Yuan) will also receive a P1, and there are no limits on this donation tier. We’re only two weeks out from the end of this campaign, so we may not see this product become a reality. Still, it’s an interesting project. These Pepsi Phones won’t be made by Pepsi, per se. Rather the company is licensing its branding for use on this product in addition to a forthcoming line of accessories and apparel. What are your thoughts on the P1? Worth the Yuan or just a yawn? Let us know in the comments!

We’ve all had that momentary panic from misplacing something important, and it only gets worse over the holiday season. If you’re rushing to get over the river or through the woods, the last thing you …
Latest
15 best Android emulators for PC and Mac of 2020
by Joe Hindy7 hours ago7254 shares
The best Wear OS watches (December 2020)
by Jimmy Westenberg18 hours ago6928 shares
You Might Like
Poll: Do you ever use your phone’s battery saver mode?
by Jon Fingas2 hours ago
Samsung’s Galaxy S21 might be much cheaper than its predecessor
by Jon Fingas4 hours ago
Here’s our first look at one of the first Snapdragon 888 phones
by Jon Fingas5 hours ago
Qualcomm’s next-gen processor is the Snapdragon 888
by Robert Triggs8 hours ago