A marked contrast to previous Galaxy Note devices, the Galaxy Note 5 and the Galaxy S6 Edge Plus are very much indicative of Samsung’s strategy to follow but how do they compare to each other and which should you buy? This is especially worth considering now that it is believed Samsung could finally be bringing the Note 5 over to Europe after originally withholding the note-taking flagship in favor of the Edge Plus. 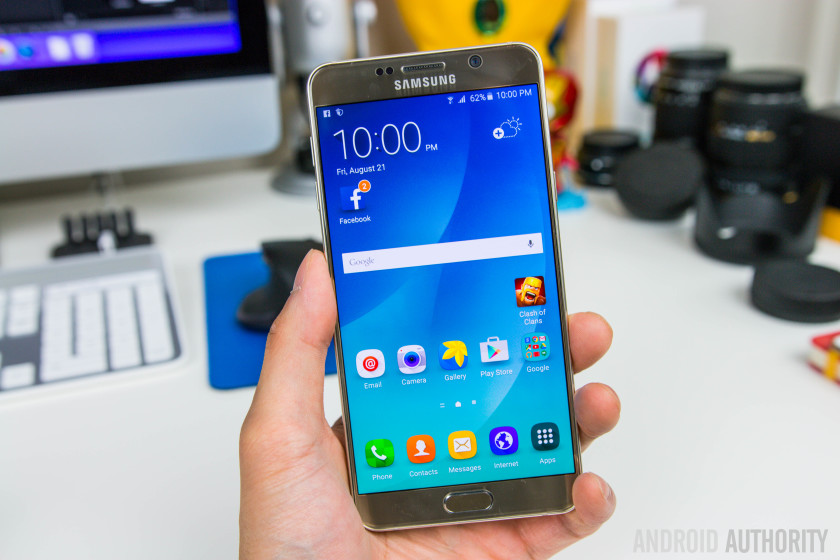 Like the Galaxy S6 and Galaxy S6 Edge, both of Samsung’s new devices are made from a metal frame combined with a Gorilla Glass 4 panel on the front and rear. Unlike the Galaxy S flagships however, Samsung has compensated for the larger size by adding a slight curve to the rear, which helps improve the usability of the handsets, but this is seen only with the Galaxy Note 5, given that the Galaxy S6 Edge Plus already have curves up front. 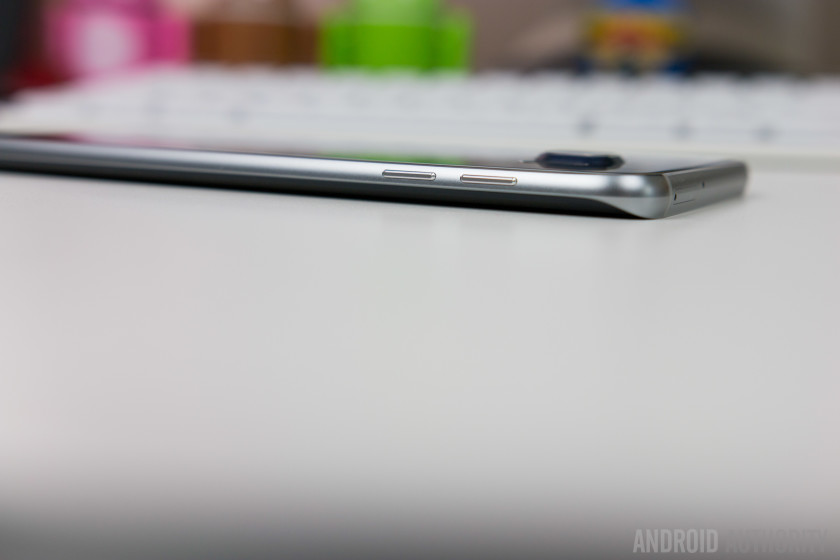 While the switch from plastic to glass has its own shortcomings (which we’ll touch on below), it does deliver a more premium look and feel to the handsets. The finish is in stark contrast to previous Galaxy Note devices, which have had plastic finishes (apart from the Galaxy Note 4, which also had a metal frame) and the change is definitely more pleasing. Upfront, both handsets have a large display with small bezels to either side and a home button beneath the display. Like the Galaxy S flagships, the home button houses a fingerprint sensor that lets you unlock the handset with a simple tap of the button. Both handsets are almost identical apart from a few changes and the biggest is the most noticeable; the Edge screen. This (and the S-Pen) are the features that differentiate the two devices and in the case of the Galaxy S6 Edge Plus, it has the same dual curved design that worked so well in the Galaxy S6 Edge. Both devices have the power key on the right with the volume keys located on the left and up top, we have the SIM removal tray along with an IR blaster. That’s right – the switch to a glass design brings one of the biggest shortcomings in the lack of expandable storage and removable battery. At the bottom, both handsets are again quite similar except for the Note 5, which has the redesigned S-Pen located at the bottom. While the S6 Edge has the curved display, it does drop the S-Pen, which becomes a feature exclusive to the Galaxy Note 5 and is probably the reason the curved handset is named the S6 Edge Plus. Also at the bottom of both devices is the speaker grill, microphone and the microUSB port. 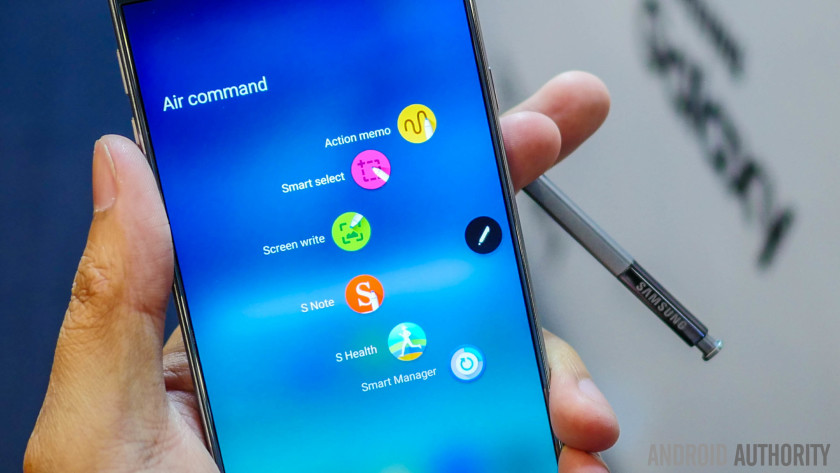 Like past Galaxy Note devices, Samsung has delivered in the display department with the Galaxy Note 5 and Galaxy S6 Edge Plus both featuring much larger displays than their Galaxy S counterparts. Both devices come with 5.67-inch Super AMOLED displays with Quad HD (2560 x 1440 pixels) resolution and while they are slightly less dense than the Galaxy S flagships – as they offer 518 pixels per inch density vs 575ppi on the S6 and S6 Edge – both displays are certainly impressive enough. 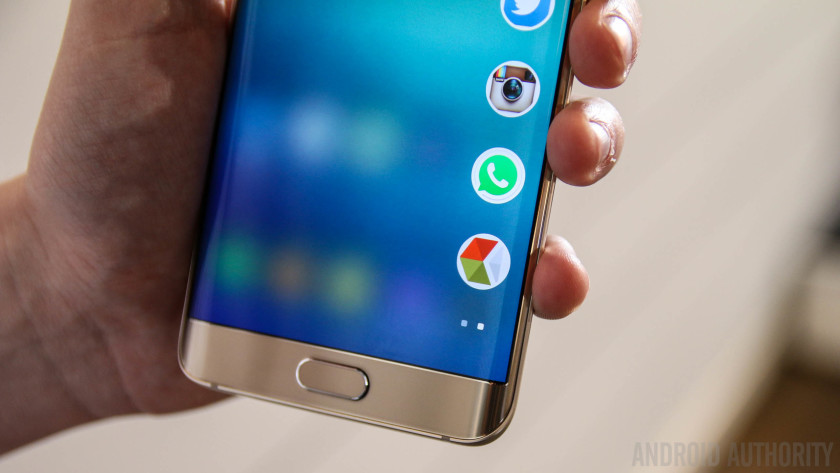 The bigger displays would normally impact on the usability of the handset but Samsung’s decision to curve the rear panel of the handset in the case of the Galaxy Note 5 means the devices are quite easy to use in the hand. That being said, both are definitely large devices which you may find too big for your needs. 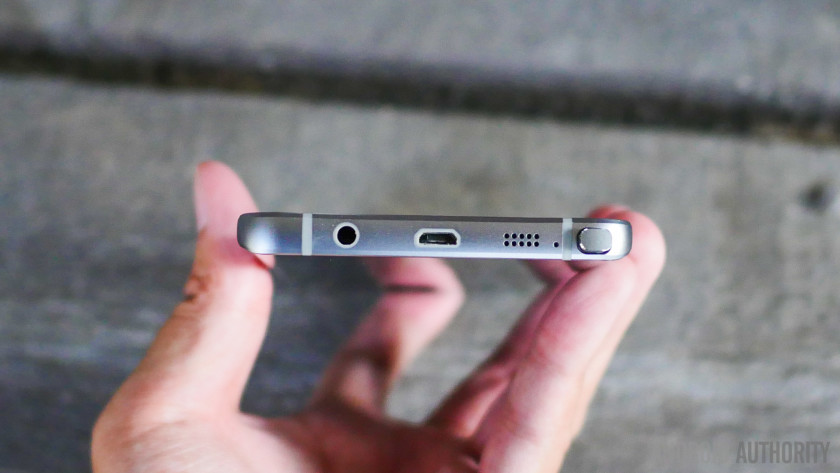 The Galaxy S6 and Galaxy S6 Edge saw Samsung switch from using Qualcomm’s processor to its own in-house Exynos 7420 processor and the decision seemed to have paid off, with both handsets proving to be some of the snappiest Samsung smartphones ever released. With the Galaxy Note 5 and the Galaxy S6 Edge Plus, Samsung has continued this trend with both devices keeping the Exynos processor but gaining more RAM. Unlike the Galaxy S flagships, which came with 3GB RAM, both of Samsung’s new phablets come with 4GB RAM and the decision to increase the RAM was likely two-fold. 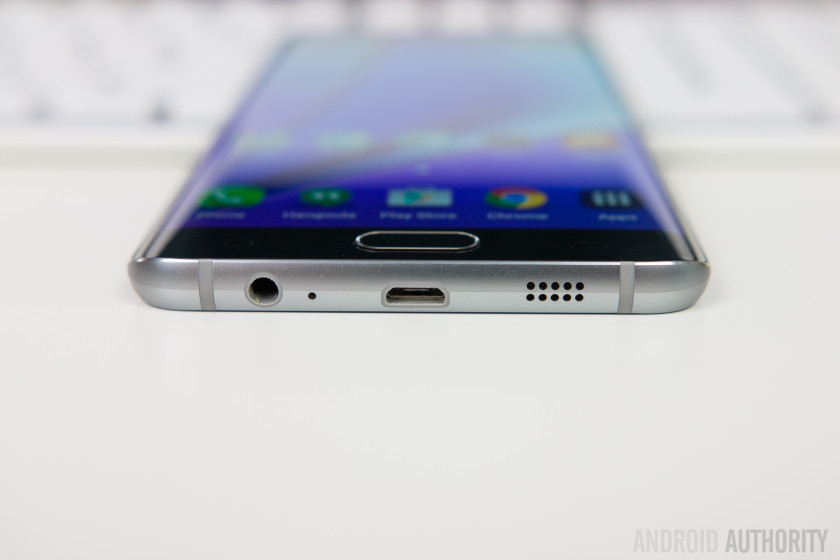 With many customers opting to follow specs on paper, the handsets are more than capable of competing against Chinese manufacturers who are using 4GB RAM in their devices (like the OnePlus 2). The decision to increase the RAM also means the little software niggles and the aggressive RAM management in Android Lollipop that were so prevalent in the Galaxy S flagships should no longer be an issue in the Galaxy Note 5 and S6 Edge Plus. Unlike past devices, Samsung has opted not to include a removable battery. Although both devices come with a 3000mAh battery that is a sizeable upgrade over the Galaxy S flagships, the capacity is still lower than the 3220mAh battery used in the Galaxy Note 4 however. Samsung claims that the 14nm manufacturing processor in the Exynos processor delivers battery life improvements requiring a smaller battery for the same battery life but as we found in our Galaxy S6 Edge Battery Review, actual battery life doesn’t back up this claim. The 3000mAh battery – which is a 450/400mAh upgrade over the Galaxy S6 and S6 Edge respectively – should deliver improved battery life but we’ll have to wait for the full review to see just how good the battery life on the new devices actually is. Where Samsung kept the unibody design of the Galaxy S6 in its new devices, the company has also kept the lack of expandable storage which means you’re stuck with either 32GB or 64GB storage. Many people have questioned this decision and whether you need expandable storage will depend on your own use case but if 32GB isn’t enough, the 64GB model should also be widely available.

Like most flagship devices, the Galaxy Note 5 and Galaxy S6 Edge Plus come equipped with an NFC chipset and this is part of a key feature on both devices: Samsung Pay. The launch of Samsung’s mobile payment solution was delayed until its new handsets were ready and now that it’s finally here, it could prove to be one of the most impressive on the market. Other mobile payment solutions require a retailer to accept contactless payments meaning even if you have NFC and its enabled on your phone, you won’t be able to pay for your items using your device unless the retailer has the necessary hardware. With Samsung Pay, there’s also the option to use Magnetic Secure Transmission, which has been developed in partnership with MasterCard and means you can use Samsung Pay with most retailers who accept swipe cards, even if they do not accept contactless payments. With the Galaxy Note 4, Samsung delivered arguably its best smartphone cameras ever and in the Galaxy S6 and Galaxy S6 Edge, it upped the game by delivering what was arguably, the best smartphone camera on the market today. The Galaxy Note 5 and S6 Edge Plus aim to continue this trend by offering a 16MP rear snapper coupled with Optical Image Stabilisation and f/1.9 aperture. On paper at least, the camera should certainly meet the standard that the Galaxy S6 set and from our first glance, we have no reason to believe this is anything but the case. 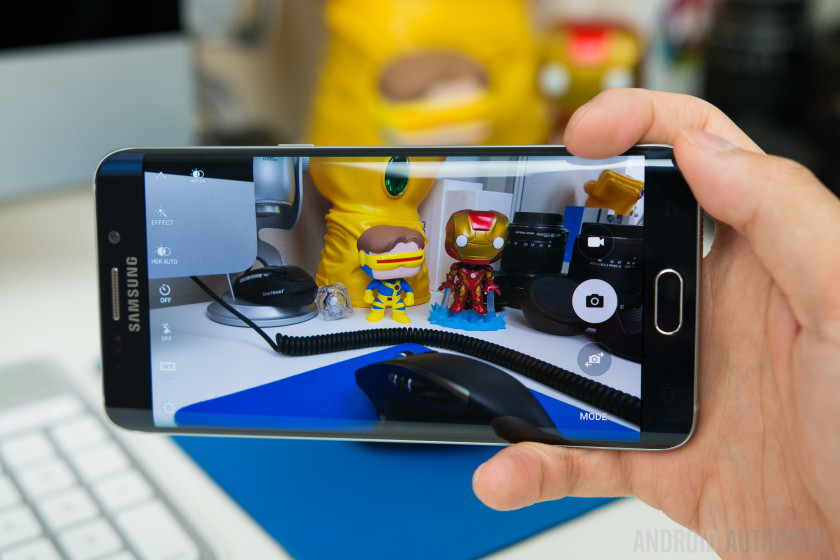 On the front of both devices, Samsung has opted for a 5MP sensor that’s equipped with a wide-angle lens that should deliver those impressive selfies we saw on the Galaxy S6 and Galaxy S6 Edge. In our full review we’ll do some in-depth testing of the camera but from first glance, it seems that the Galaxy Note 5 and S6 Edge Plus cameras will certainly deliver. 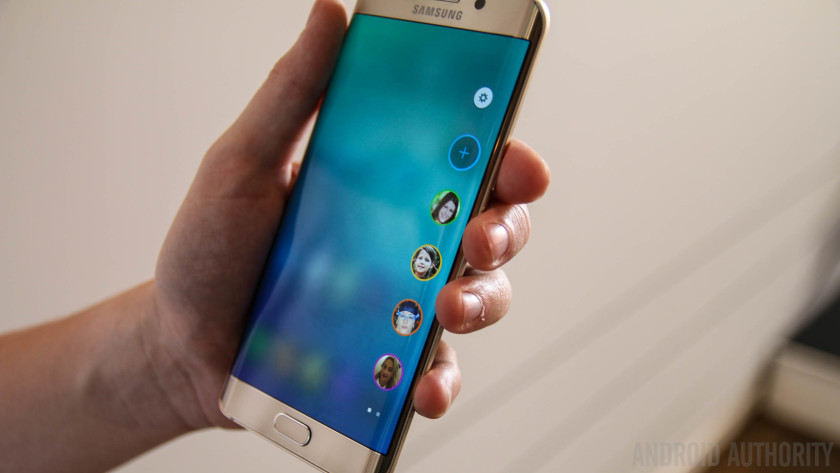 Now to the software and arguably the biggest difference between the Galaxy S6 Edge Plus and the Galaxy Note 5. Given that both handsets are almost identical, deciding between the two handsets comes down to whether you need an S-Pen for productivity or the curved design with the Edge Screen. Both of these features have been updated in the latest version of Samsung’s TouchWiz and picking between the two handsets will very much come down to which feature is right for you. 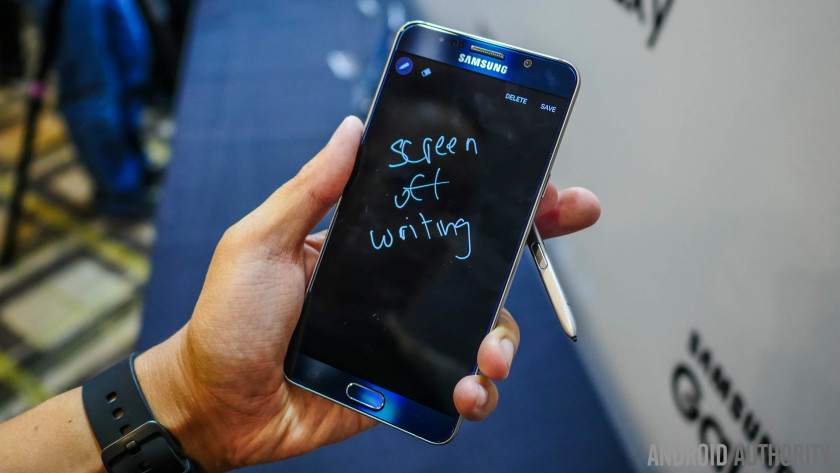 Not to be left out, the S-Pen on the Galaxy Note 5 has also been updated to include a couple of new features. On the Note 5, when the display is switched off you can now use the S-Pen to capture a memo and it also comes with a revamped Air Command menu, which now hides most of the screen and has a more premium look and feel. 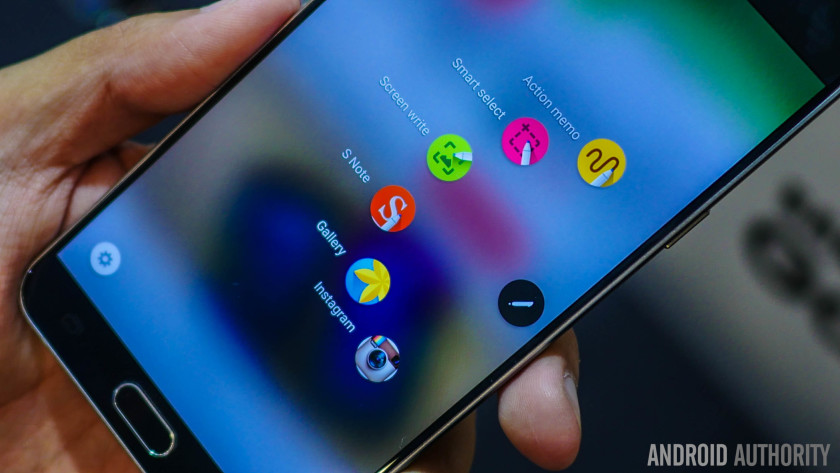 The S-Pen has also gained a new Scroll Capture feature that lets you capture an entire page (and not just what’s visible on the display) and annotate it using the S-Pen. Like previous Galaxy Note devices, the S-Pen itself has also been redesigned and now has a more premium design, that looks a lot more like an actual pen. The most useful addition however is Screen-Off Memo. When you pull out the S-Pen when the screen is off, the display activates, allowing you to quickly make a note, and is a feature that will be very handy when you need to jot down a phone number or other information quickly. There you have it, a quick look at the Galaxy S6 Edge Plus and the Galaxy Note 5 and how these two very similar devices actually compare. Which is the right device for you? It all comes down to one question; do you need the S-Pen for the productivity or the premium curved design and Edge Screen features? Answer that and you’ll know which one is right for you.

What do you think of Samsung’s new devices? Let us know your views in the comments below guys and don’t forget to stay tuned for all of our Galaxy Note 5 and Galaxy S6 Edge Plus coverage.