If Verizon and AT&T get their way, what type of internet future do many have? 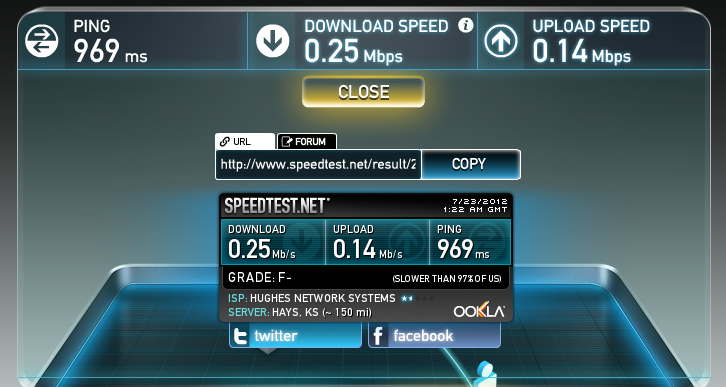 As discussed previously at Android Authority, Verizon and AT&T want to rid themselves of DSL users so they can focus on wireless packages which are easier to install, cheaper to maintain, and the companies make more money by charging users upwards of $15 per gigabyte. So, what would the future look like if we allowed Verizon and AT&T to ditch the copper-lines that they received billions to maintain over the years? What would those people in rural areas use to get Internet or phone calls?

The FCC says 99.9% of the public can get broadband via satellite (at speeds of 12 Mbps or better). Sadly, even in the year 2014, satellite broadband services are still struggling to provide basic internet services that limit customers ability to even play video games (latency issues) or watch multiple movies a month. While many of us enjoy downloads speeds of 50 or even 100 Mbps, 119 million Americans lack broadband access (defined as 4Mbps down and 1Mbps up). Out of those 119 million, 19 million live in areas where there is no option to buy a wired broadband connection.

Just last week, a newspaper in Thunder Bay, Canada, wrote a story about a woman who couldn’t get any internet service provider to wire her place of business:

Ree uses Xplornet, a rural broadband provider, but the service is slow, so she often relies on the data network on her smartphone. “Our bill is insane. This month it’s $180. I have two children that will be going to school and will be needing it when they go”

On the whole, satellite broadband continues to be extremely expensive per gigabyte. Satellite provider Wildblue’s has a 25GB plan at 12Mbps, which costs $129.99 per month. If you are a HughesNet subscriber, guess who much you would have to pay if you wanted to watch a single film on Netflix in 4K? Only $850. Between 2012 and 2013, HughesNet promised that their new “Gen4” satellite broadband service would revolutionize broadband.

Yet, customers have continued to complain about slow speeds and capacity issues. HughesNet’s Gen4’s 10-15 Mbps plans are failing to deliver even 2 Mbps for many users, with some seeing speeds as low as 200kbps or so. HughesNet is one of the most poorly ranked broadband providers on DSLReports customer performance rankings, even though most of their customer base has few if any other options. That’s good news for wireless broadband companies, who are now offering faster and more consistent LTE wireless service (albeit also with significant usage caps) in many of these markets.

Just two years ago at CES, ViaSat was promoting their new 12 Mbps satellite broadband service. Much like today, ViaSat did not tell those in attendance that the customers would be subject to throttling, small usage caps and generally poor consistency. Then again, during 2012, Wildblue was competing with ViaSat by offering customers speeds of 1.5 Mbps for $80 per month. What competition!

Verizon attempted to hang up their copper networks in Hurricane Sandy-impacted areas and put in Verizon’s Voice Link wireless service. It was an unmitigated disaster. People complained that the service was quirky, lacked features like caller ID, and didn’t include data, therefore requiring another costly data plan with low data caps. Then there is this:

“Not only will Voice Link not work if the power fails — a backup battery provides two hours of talking time, hardly reassuring to people battered by Sandy — but Verizon warns Voice Link users that calls to 911 under normal conditions might not go through because of network congestion. Medical devices that require periodic tests over phone lines, like many pacemakers, cannot transmit over Voice Link. Fax machines do not work over most wireless phone networks, including Voice Link. Neither do many home security systems, which depend on a copper phone line to connect to a response center.

“They told us this was the greatest thing in the world,” Mr. Flihan said. But he estimates that roughly 25 percent of the calls he makes through the Verizon Voice Link service do not go through the first time he dials, or sometimes the second or third.”