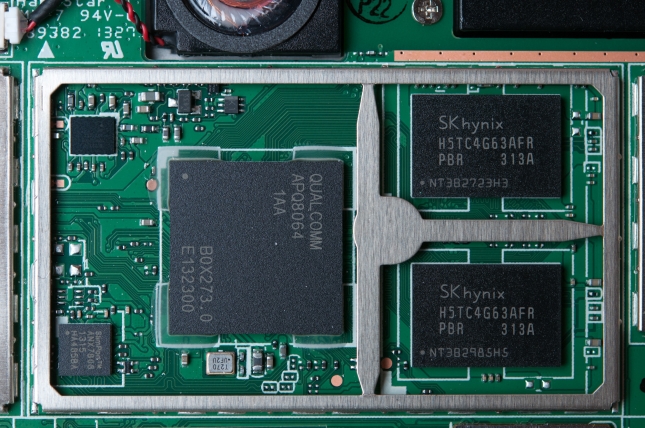 I am not a mobile hardware expert, but I consider Brian Klug of AnandTech one, and here’s what he has to say about the way Qualcomm names its processors:

.@hugoa_tech At this point I’ve thrown my hands up about what an S4 Pro vs S600 is, it’s arbitrary, don’t care anymore

Yup, even Brian is confused about what exactly qualifies a Qualcomm chip to be called a Snapdragon 600 or a Snapdragon S4 Pro. And don’t get me started on the elusive difference between S4 Plus and Snapdragon 400…

So, for all intents and purposes, Brian thinks, the APQ8064–1AA SoC inside the Nexus 7 is a Snapdragon 600 underclocked at 1.5GHz. Officially, S600 chips are clocked above 1.7GHz, which might explain why Qualcomm decided to call the APQ8064–1AA an S4 Pro.

One other major improvement hardware-wise is the presence of improved eMMC flash storage modules. As a result, the 2013 Nexus 7 clearly outperforms the 2012 Nexus 7 in storage benchmarks, and we expect to see the difference to feel in real life as well.

What does all this technobabble mean for the average user? It means that the new Nexus 7 should perform vastly better than the old Nexus 7 or the Nexus 4, even if, at first sight, the differences between them aren’t that big. And that’s all that really matters at the end of the day.

Privacy has become one of the greatest concerns of our day, although it’s something I’m sure we’d rather all not think too much about. Today, everyone carries around their primary point of weakness in their …
Latest
Save $210 on a Samsung 11.6-inch Chromebook and more cheap Chromebook deals
by Matt HorneOctober 26, 2020341 shares
You Might Like
We asked, you told us: The Google Pixel series needs a complete camera overhaul
by Andy Walker2 hours ago13 shares
Google discontinues Nest Secure alarm system (Update: Future support)
by Jon Fingas6 hours ago61 shares
Apple quietly working on its own search engine to reduce reliance on Google
by C. Scott Brown11 hours ago686 shares
Qualcomm’s new platform brings wider Wi-Fi 6 and 6E support to mesh routers
by Dhruv BhutaniOctober 27, 202062 shares