9 fun drones you can control with your smartphone

This post was originally published on our sister site DroneRush.com

Traditional RC toys rely on dedicated controllers to operate, but modern technology put an extremely capable smart device in your pocket and many manufacturers look to use it for their new toys. I’m being vague, I refer to quadcopter style drones you can control with your smartphone or tablet.

Higher-end drones still rely on a dedicated remote for actual flight controls, but many toy class units fly using nothing more than an app and a WiFi or Bluetooth connection. Let’s take a look at some of the best on the market today. Perhaps the most important drone to hit the market in 2019, the DJI Mavic Mini is a compact, folding drone like none before. It is designed and operates a lot like the larger Mavic drones, just with a simpler set of features and reduced specifications. You are limited to 29 mph, 2.7K video recording, and fewer obstacle avoidance sensors, but keeping the drone below 250 grams, below 0.55 lbs, means a lot for legal purposes. Drones this small do not require registration with the FAA before you fly in the United States, or Transport Canada for the great white north. At 249 grams, or 0.548 lbs, you can skip registration, but the Mavic Mini is still a drone, you still have to follow the rules of the sky. Launched in August 2018, the DJI Mavic 2 Zoom and Mavic 2 Pro are the same drone, as far as connectivity to your smartphone goes. They have different cameras, offering different modes for different shooting styles, but they are, otherwise, two of the very best drones that DJI has put to market. Through the DJI GO 4 application, or other apps like AirMap and Litchi, you can put a highly capable, speedy but smooth drone into the air. Taking things to an entirely new level for obstacle avoidance, the Skydio 2 is a powerful machine with a Nvidia computer on-board to help navigate. This 4K flying machine pretty much flies itself, just use your mobile device to tell it to take off and follow you, then head on down the road. It’s pretty impressive, especially the smaller form factor and price from the larger Skydio R1 before it. 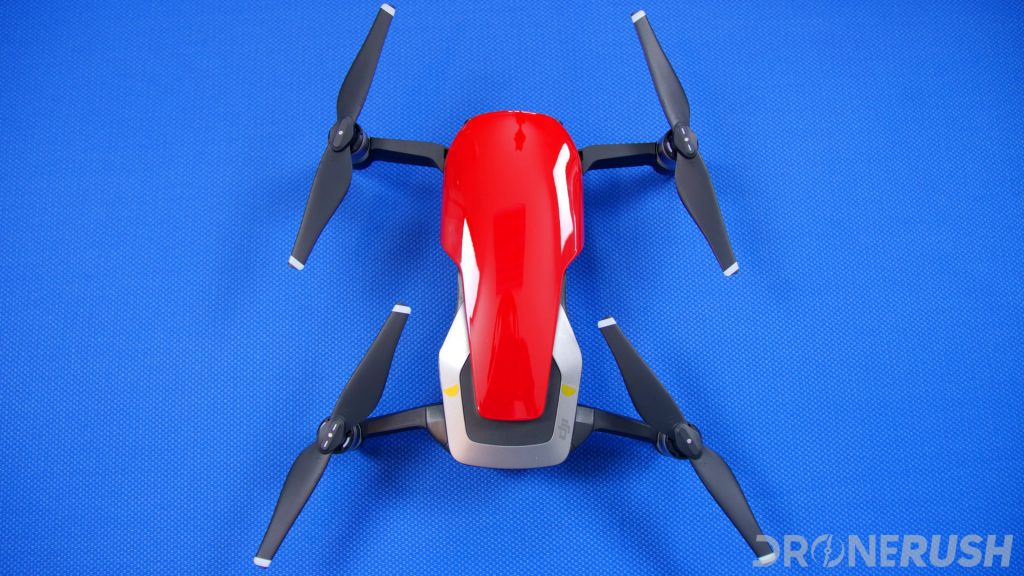 I’m sure you’ve heard that DJI has announced the new Mavic Air, a compact, folding drone that packs the best of the Mavic Pro and Spark into one. Well, that goes for flying the quadcopter by hand gestures and using the mobile application. We’ll be bringing you plenty more coverage of this new drone soon, for now, if you like DJI products, were looking for a portable option and wondering which is the best, the Mavic Air is probably the answer.

Learn more about the Mavic Air: We hesitated to add this here, the Mavic Pro, as with other DJI drones that can be controlled via smartphone, benefit greatly using the controller and smartphone in combination. Thing is, there is a WiFi mode that allows you to take control using just your phone. Range is limited, capabilities are not all utilized, but you can do it. Take the control method out of the equation and I can do nothing more than gush at how great of a drone you are getting here; the compact, folding design is unrivaled today, particularly in this capable of a 4K video recording drone with excellent autonomous features.

Learn more about the Mavic Pro The compact, folding drone market exploded for consumer class machines, and we’re happy to see Yuneec produce an offering, or two. The Yuneec Mantis Q kicked it off, but the Mantis G is the variant that camera enthusiasts will want to look at. As far as controlling this drone with your phone goes, it is, perhaps, the most fun around. Yuneec built voice control into this drone! Talk into your phone, it translates your words then transmits the controls to the drone.

Also seen in our Hubsan drones at CES video We spent some time with Hubsan at CES behind closed doors, they have some interesting and fun stuff in the pipeline, but next to hit the market will be the new Pro version of the brushless H501S. Despite using their advanced controller with FPV video screen, you can actually fly this drone, as with many other Hubsan drones, using just the app.

They have a special tiny controller in the works that seems little more than a phone dock, which, to be fair, is basically what it is. Put your phone to use on a number of Hubsan drones, including the X4 H501S Pro. or the lesser expensive X4 H501S Brushless for $178 on Amazon today.

What is a drone? The military builds them as highly capable unmanned aircraft for reconnaissance and more, the toy store says it’s a flying multi-rotor remote controlled toy, but if we are to be fairly exact about it, we’re looking at an unmanned craft of pretty much any sort. Under the water, in the air or across the ground, whether autonomous or remote controlled, there are many types of drones, and within these guidelines, Sphero’s BB-8 has got to be one of our favorite.

Control BB-8 with your smartphone, roll along the ground and enjoy some fun sound effects, augmented reality stories and more. Check out our initial thoughts on this toy. I might add that Edgar, who wrote the post, got his hands on this droid at CES 2016. We’re serious fans around here. While there are few drones that accept your smartphone as the only input method, don’t forget that you can enhance or augment most flying experiences by adding your phone or tablet into the mix. DJI is a primary player in this setup, most of their drones are made to be control by remote, but then use your phone as FPV video screen.

Our favorite DJI Mavic Pro is a primary example of this, your connected phone displays what the camera on the drone sees. Further, you can control the camera from the phone and you initiate most advanced flying modes from the app on your mobile device.

In this regard, there are many, many drones that you can control, at least in part, using your smartphone.

In terms of VR capabilities with your smartphone and your drone, head on over to our partner site VRSource for David Imel’s take on the best VR drones. While you’re looking into VR, and flying by phone, why not also check out the DJI Goggles. This new headset can connect to your DJI Mavic Pro, the new DJI Spark and has an HDMI input, so it can act as display for way more than just your drone.

That sums up some of the best drones you can fly using your smartphone or tablet. There are many, but mostly just toy-class units that you can control completely via mobile device, however, keep your phone charged, it is a valuable tool for most drones even if you can’t directly control them.

Read: The best drones for kids

What is your favorite drone to fly using just your Android phone or tablet?

What’s next?
We’ve got all the Best drones here, or check out our master Drone Rush drones list!